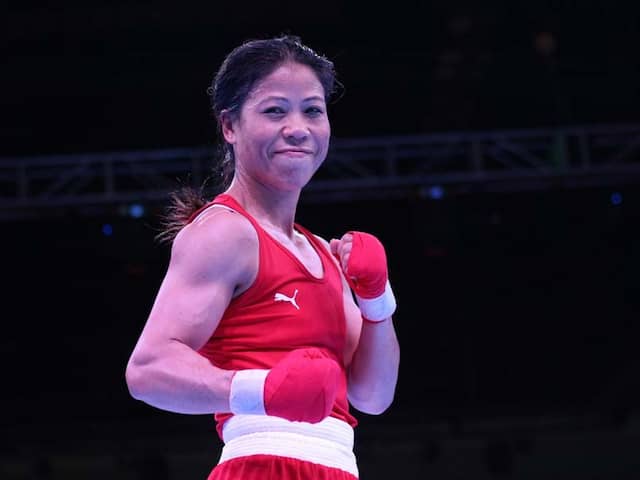 Mary Kom had to sweat it out against her opponent in the semi-final.© BFI

Six-time World Championships gold medallist Mary Kom and former World Championships bronze medallist Gaurav Bidhuri on Saturday staved off tough challenges in their respective weight categories to make the finals of 23rd President's Cup in Labuan Bajo in Indonesia. Apart from Mary Kom and Bidhuri, nine other Indian boxers also reached the finals. Fresh from winning the gold at the India Open two months ago, Indian boxing legend Mary Kom participated in this prestigious tournament with the aim of testing herself and getting some much-needed bouts under the belt ahead of the World Championships in October.

Mary (51kg) had to sweat it out against Vietnam's Anh vo Thi Kim in the semi-final before she could prevail 3-2 over her opponent. Mary will be continuing her gold quest against Australia's Franks April on Sunday.

2017 Ulaanbaatar Cup gold medallist Ankush Dahiya too notched up a victory by an identical scoreline over Korea's Giheon You in 64kg, while Simon Prestige Memorial tournament 2017 bronze medallist Neeraj Swami also showed his resolve to eke out a gritty 3-2 win over Indonesia's Langu Kornelis K.

Among the men, only Ananta Pralhad Chopade (52kg) had a breezy win as he outpunched Sri Lanka's Dharmasena Piyal 5-0 to progress to the final.

Asian Boxing Championships silver medallist Simranjit was flawless in her first bout of the tournament and outpunched Italy's Francesca Martusciello 5-0 in a commanding performance to enter the final, where she will be up against Indonesia's Asian Games bronze medallist Hasanah Huswatun.

Dagar, a silver medallist at the 2018 India Open, posted a convincing 5-0 victory over Indonesian Naumeo Defri and set up a meeting with Samada Saputra in the title clash.

In 48kg, Monika ended the challenge of Indonesia's Niis Anggelina 5-0 to book her place in the final against Endang of Indonesia.

Comments
Topics mentioned in this article
Boxing Mary Kom
Get the latest updates on IPL 2020, check out the IPL Schedule for 2020 and Indian Premier League (IPL) Cricket live score . Like us on Facebook or follow us on Twitter for more sports updates. You can also download the NDTV Cricket app for Android or iOS.