Manny Pacquiao almost knocked Adrien Broner down twice in the 7th and 9th rounds and showed that he can still be a force despite turning 40 last month. 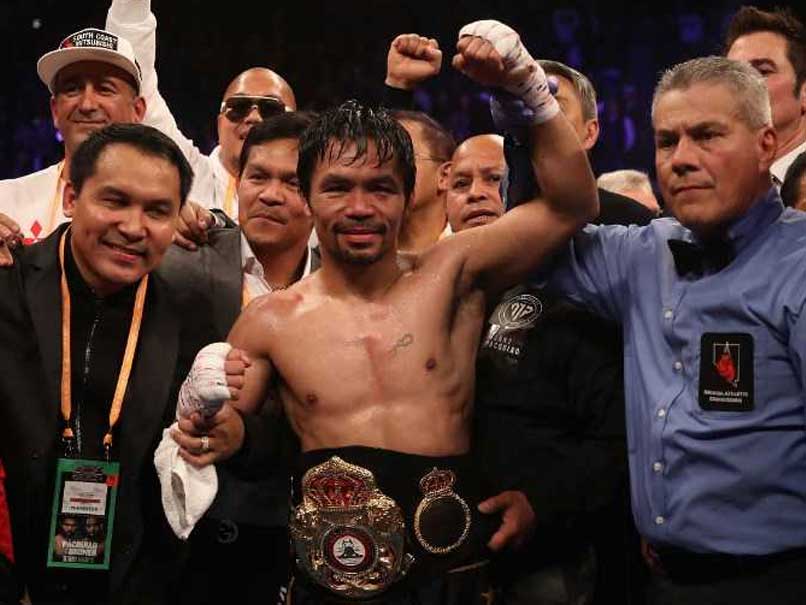 Manny Pacquiao defended his welterweight title in his first fight on US soil in two years.© AFP

Manny Pacquiao put on a masterclass in elite boxing on Saturday with a 12-round demolition of Adrien Broner, defending his welterweight title in his first fight on US soil in two years -- and his first as a 40-year-old. Pacquiao easily won with an impressive display of superior hand speed and destructive power that landed him a unanimous decision victory over the much younger American at the MGM Grand Hotel in Las Vegas. The Filipino star almost knocked Broner down twice in the seventh and ninth rounds and showed that he can still be a force in the highly-competitive division despite turning 40 last month.

"I really don't believe my career is over. I proved it in my last fight against (Lucas) Matthysee," Pacquiao said. "And now I prove it again at the age of 40."

In his 70th fight as a professional, Pacquiao retains the lesser version of the WBA's two welterweight belts and possibly sets the stage for a rematch with Floyd Mayweather, who watched the bout from ringside.

Pacquiao started the onslaught in the seventh round by hitting the 29-year-old Broner with a left hook then immediately doubling it up.

Broner went into a shell mode, absorbing more blows but managed to hold on to the end of the round.

Pacquiao landed his best punch in the ninth with a blistering left on the chin that sent Broner back peddling towards the ropes. But Broner showed he can take a punch as he stayed on his feet and survived another punishing round.

Pacquiao is now hoping to avenge his 2015 loss to Mayweather which became the richest one-day sporting event in history.

Immediately after the fight Pacquiao called out Mayweather.

Mayweather, who helped promote Saturday's boxing card, was non-committal when asked if he would get back in the ring with Pacquiao.

"Right now I am living the happy life," he said.

Mayweather also visited Pacquiao in his dressing room before the fight. "He just said hello. Wished me luck," Pacquiao said.

Pacquiao went to work from the opening bell on executing the fight plan he put together after reuniting with his long-time trainer Freddie Roach.

He was the more active of the two boxers and it didn't take long for Broner to get frustrated with Pacquiao's speed as Broner delivered a right forearm shiver to his opponent's jaw at the end of the second round.

Pacquiao did a good job of setting up solid head and body shots with well-timed head fakes and jabs. His most effective punch in the early rounds was a body shot and then a left hook to the face as Broner ducked down to protect his midsection.

Pacquiao had a good sixth round but got caught at the end with an uppercut and left hook on the chin -- though even that wasn't enough for Broner to win the round.

Pacquiao's best rounds were seven through nine but the only blemish on his night was he couldn't get his second knockout in a row.

"I can still be a greasy fighter and give my best at the age of 40," he said.

"I wanted to be more aggressive but (co-trainer Buboy Fernandez) told me to counter and wait for opportunities."

Broner seemed content to simply flail away for most of the fight with a slapping jab that hardly connected.

Broner said after the fight he was pleased with his performance and disagreed with the scoring.

"You all know I beat that boy," Broner said. "They trying to get that money again with Pacquiao and Floyd but it's cool. I ain't worrying about that."

Mayweather won the 2015 bout with Pacquiao in a contest that generated $600 million in revenue and a record 4.6 million pay per view buys but failed to live up to its "Fight of the Century" hype.

Pacquiao was hampered after suffering a torn right rotator cuff while training for Mayweather.

Mayweather, who turns 42 next month, recently earned $9 million for knocking down a Japanese kick boxer three times in the first round of a New Years Eve spectacle in Japan.

Pacquiao last fought in July, 2018, when he scored his first knockout in six years with a seventh-round stoppage of Argentina's Matthysse in Kuala Lumpur.

It is his first bout in the US since a unanimous decision win over Jessie Vargas in Las Vegas in November 2016.

Since then, Pacquiao's career had followed an uncertain trajectory, with a shock defeat to Australia's Jeff Horn in Brisbane in 2017 followed by a year-long absence from the ring.