Gaurav Solanki (57kg) and Ashish Kumar (75kg) advanced to the pre-quarters after winning their opening-round bouts 5-0. 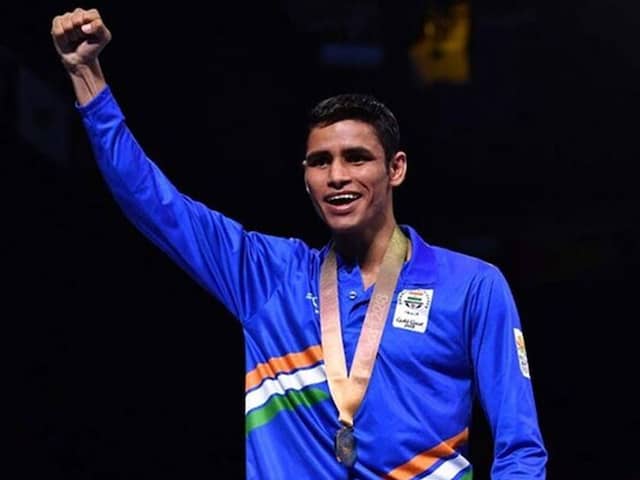 Ashish will square off against Kyrgyzstan's Omurbek Bekzhigit Uulu, who has been seeded fourth. The Indian had beaten Uulu in the quarterfinals of the Asian Championships last year.

Solanki, whose CWG gold was in the 52kg division, will be up against top-seeded Uzbek Mirazizbek Mirzakhalilov, who got a bye into the second round.

Mirzakhalilov is the reigning world champion in this weight category besides being a gold-medallist at the 2018 Asian Games as well as the Asian Championships.

Solanki dominated from the word go, helped by Uulu's poor defence. The Indian was relentless and accurate in his attacks, scoring mostly through clean straight punches.

Later, Ashish also produced a confident performance against a sprightly rival. The Indian kept his guard low and relied on counter-attacks to get the judges' nod.

The Indian's superior reach and power wore down the Taiwanese boxer, who took a tumble more than once in the second and third rounds after a split verdict in the opening three minutes.

Advancing to the semifinals in this event would assure boxers of a spot in the Tokyo Olympics scheduled later this year.

World silver-medallist Amit Panghal (52kg) has been given the top billing in the men's competition, while the iconic MC Mary Kom (51kg) is seeded second in the women's event.

Among other Indians, two-time World Championships bronze medallist Lovlina Borgohain (69kg), Asian Championships gold medallist Pooja Rani (75kg) and Commonwealth Games silver medallist Satish Kumar (+91kg) are one win away from qualifying for the Olympics due to the small size of their respective draws.