The Asian Olympic Qualifiers for boxing start in Jordan's Amman on Tuesday. 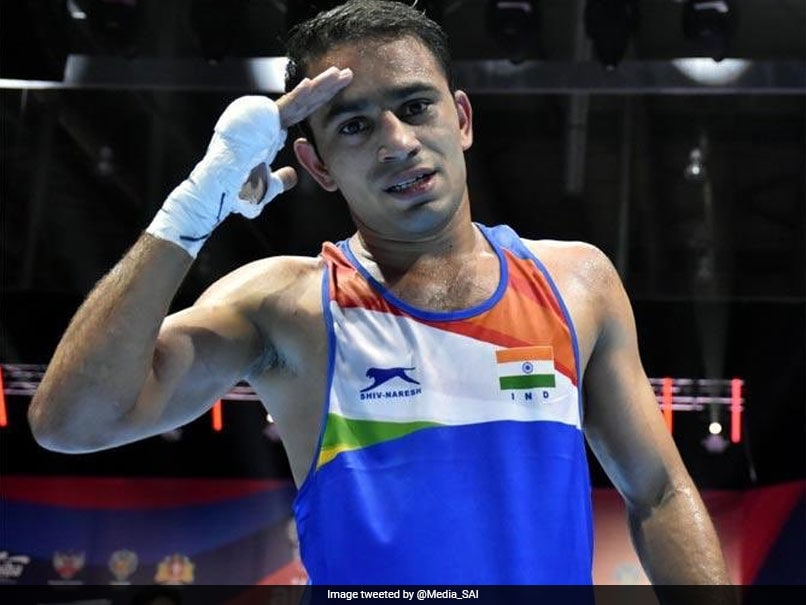 Amit Panghal has been seeded first in the 52 kg category.© Twitter

World silver-medallist Amit Panghal (52kg) has been given the top billing in the men's competition while the iconic MC Mary Kom (51kg) seeded second in the women's event of the Asian Olympic Qualifiers for boxing starting in Jordan's Amman on Tuesday. Eight men and five women from India will be aiming to secure Tokyo Olympics berths at the continental event being conducted by the International Olympic Committee's (IOC) Boxing Task Force. While Panghal is the lone Indian man to be seeded, two-time world bronze-medallist Lovlina Borgohain (69kg) and Pooja Rani (75kg) have been seeded second and fourth respectively in the women's competition.

The Indian team arrived in Jordan on Friday last week after a training stint in Assisi, Italy, a country battling the novel coronavirus outbreak which has claimed over 3,000 lives across the world since being discovered in Wuhan, China.

"Everything is fine here. The team is in high spirits and we are looking forward to a strong performance," Indian boxing's High Performance Director Santiago Nieva told PTI.

"We have worked on some areas to ensure that our opponents do not stand a chance," he asserted.

The tournament has 63 quota places on offer and a boxer will be assured for a Tokyo ticket on reaching the semifinals stage.

In some weight categories, depending on the size of the draw, there could be box-offs between losing quarterfinalists to decide the Olympic berths.

The Indian hopes will be spearheaded by Panghal and Mary Kom, both proven and consistent performers on the big stage.

Expectations will also be high from Borgohain, who has been rising up the ranks with some strong performances, including back-to-back world bronze medals.

Also, national champion Simranjit Kaur (60kg) can be considered among the contenders after having beaten veteran Sarita Devi in the trials.

Among the men, Commonwealth Games silver-medallist Manish Kaushik (63kg) is a strong contender to book a Tokyo spot along with Panghal.

Not to forget, Commonwealth Games gold-medallist Vikas Krishan, who will compete in the 69kg category.

Krishan had won a gold at the South Asian Games last December, his first amateur competition after a stint in the pro circuit that was cut short by injury.

Comments
Topics mentioned in this article
Amit Panghal Mary Kom Boxing
Get the latest updates on ICC Women's Cricket World Cup 2022 and IPL 2022, check out the Schedule , Live Score and IPL Points Table. Like us on Facebook or follow us on Twitter for more sports updates. You can also download the NDTV Cricket app for Android or iOS.