Manisha Moun will face reigning world champion Dina Zholaman of Kazakhstan in the pre-quarterfinals of the 54 kg weight category.

Indian boxer Manisha Moun beat Christina Cruz of the US and progressed to the pre-quarterfinals of the 54 kg weight category in the AIBA Women's World Championships on Friday. Manisha Moun, making her debut in the World Championships, controlled the momentum of the match from the first round and beat Christina Cruz, who is a two-time World bronze medallist, through an unanimous decision (29-28, 30-27, 30-26, 30-26, 29-28). In the 60kg lightweight category, veteran Indian boxer Sarita Devi also reached the last 16 of the tournament with a comfortable win over Sandra Diana Brugger of Switzerland.

Earlier, Manisha, who had won gold at the India Open and silver in the Silesian Women's Boxing championship in Poland this year, said that she is confident of doing well in the subsequent rounds.

"I am very proud of winning my first bout in the World Championships. I have proved that I can be at this stage. I will give my best and see how far I can go. I am confident of doing well in the coming rounds," said Manisha.

Talking about her strategy against Christina, Manisha said, "My coaches told me to play from a distance. Her (Cruz's) right was very strong so coaches told me to watch here right. I tried to miss his punches from the right and attacked from the left. That was the plan and I did just that."

"The first round was about observing my opponent and find out what to do and what not to do. In the second round, I went with the plan and I was able to land my punches. In the third round, I went for attack and gave the best attack and won the bout," she added.

In the pre-quarterfinals on Sunday, Manisha will face reigning world champion Dina Zholaman of Kazakhstan, whom she had beaten in Poland.

"My next bout is against the world champion but I have beaten her in Poland. It will be tough but I can beat her," she added.

"I lost to her (Manisha) in Poland but that is boxing, it happens. She is a good boxer," said the boxer from Kazakhstan.

However, in the second round both boxers went for the flurry failed to impress the judges. Towards the close of the second round, Sandra sent a few lefts and a tiring Sarita, too, managed to trade a few blows. 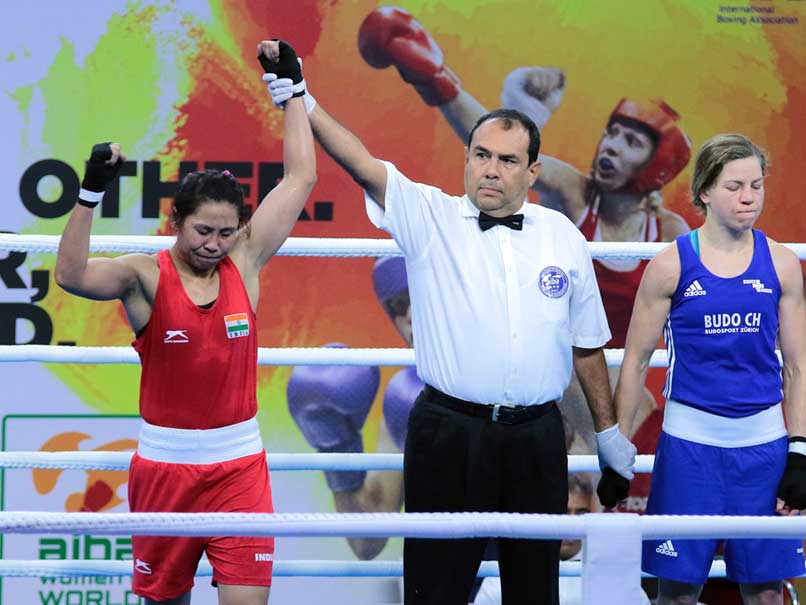 In the third, a tactical Sarita did extremely well to land a couple of straight ones and a left and right with the Swiss needing to attack to make a bout of it.

"I was not nervous. I was just watching her before I went for the attack. The crowd support also mattered a lot and I must thank all the Indian fans," Sarita said about her bout.

Sarita will next meet Harrington K from Ireland in the pre-quarters.