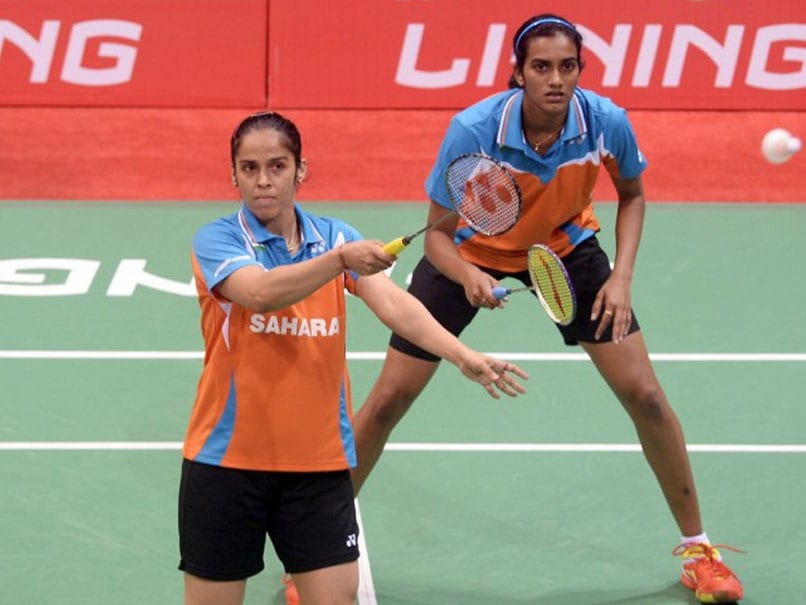 Saina Nehwal and PV Sindhu have received byes in the 1st round of the women's singles event.© AFP

India's top two women shuttlers, PV Sindhu and Saina Nehwal, will be playing in the World Championships starting in Glasgow from April 21. Sindhu and Nehwal, both medallists in the prestigious event, have received byes in the first round. While twice bronze-medallist Sindhu will start her campaign against Korea's Kim Hyo Min or Egypt's Hadia Hosny in the second round, the 2015 silver-medallist Nehwal will take on the winner of the match between Switzerland's Sabrina Jaquet and Ukraine's Natalya Voytsekh.

It's likely for Sindhu to meet China's Sun Yu for a place at the quarterfinals while Nehwal is expected to clash with Korean second seed Sung Ji Hyun for a place in the pre-quarterfinals.

India's top male shuttler Kidambi Srikanth, who clinched two successive titles at Indonesia and Australia and reached the final at Singapore Open, will open his campaign against Russia's Sergey Sirant.

Among other Indians playing in the men's singles event, 15th seed B Sai Praneeth, who won his maiden Super Series title beating Srikanth at Singapore, will face Hong Kong's Wei Nan. Meanwhile, Ajay Jayaram will take on Austrian Luka Wraber in the opening round.

Sameer Verma, playing his maiden World Championships after being given a direct entry in the main draw, will square off against Spain's Pablo Abian.

In women's singles, national champion Rituparna Das will meet Finnish shuttler Airi Mikkela in the opening round, while Tanvi Lad will fight it out against England's Chloe Birch.

Rio Olympians Manu Attri and B Sumeeth Reddy will be up against Korean pair of Chung Eui Seok and Kim Dukyoung, while Satwiksairaj Rankireddy and Chirag Shetty will face Japanese combo of Hiroyuki Endo and Yuta Watanabe in the opening round of men's doubles.

In women's doubles, Ashwini Ponnappa and Sikki are pitted against Indonesia's Ririn Amelia and Malaysia's Anna Ching Yik Cheong in the opening round.

Comments
Topics mentioned in this article
PV Sindhu Saina Nehwal Kidambi Srikanth Ajay Jayaram B. Sai Praneeth Badminton
Get the latest updates on India vs England Series, India vs England , live score and IPL 2021 Auction . Like us on Facebook or follow us on Twitter for more sports updates. You can also download the NDTV Cricket app for Android or iOS.