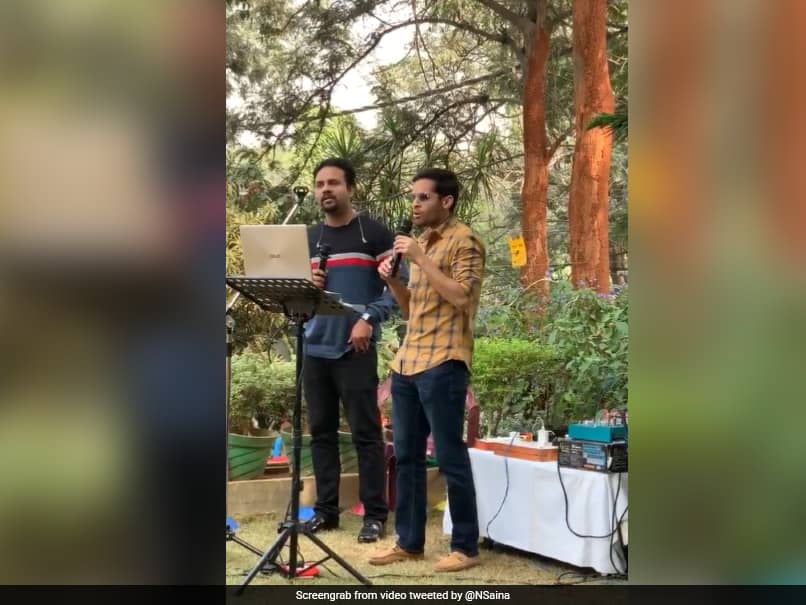 Parupalli Kashyap wowed fans with his rendition of a hit Bollywood song.© Twitter

Saina Nehwal, who celebrated her first wedding anniversary on December 17, took to Twitter to share a video of her husband Parupalli Kashyap singing a hit Bollywood song "Ishq Sufiyana" from the movie "The Dirty Picture" on Sunday. In the video, Parupalli Kashyap can be seen showcasing his skills with the mic in hand. Saina Nehwal captioned the video with three emojis. Kashyap's singing skills were a super hit on Twitter with fans flooding Saina's post with appreciatory tweets.

"Smashing it in different style," a fan tweeted.

Smashing it in different style !

"Nice voice," another one joined in.

This is going viral .He does have a great voice .

The couple got married in Hyderabad last year.

The two international players have been training with national badminton coach Pullela Gopichand since 2005 and reportedly dated for over 10 years, before tying the knot in a private ceremony in Hyderabad on December 14 last year.

Saina, credited with popularising the sport in the country, created history by winning country's first-ever individual Olympic medal in badminton when she clinched bronze at 2012 London Olympics.

The ace shuttler had to fight numerous injuries throughout the year and in a bid to focus on her recovery, she pulled out of the upcoming season of Badminton Premier League.

Saina had started 2019 with a win over Carolina Marin at the Indonesia Masters but has failed to win a single tournament since then.

The dip in the performance has seen her slip to number 11 in the BWF rankings.