Ever since Pullela Gopichand emulated Prakash Padukone's 1980 feat in 2001, no Indian has ever laid claim to the crown with Saina Nehwal being the country's only shuttler to come close to achieving that rare feat when she reached the finals at 2015 before losing to Olympic champion Carolina Marin. 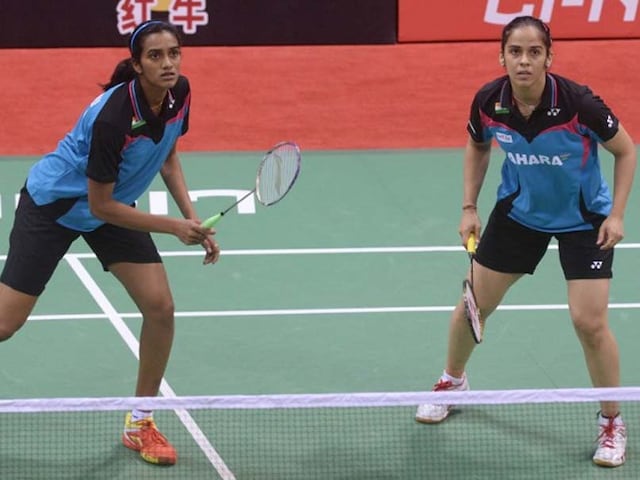 Saina Nehwal was beaten in the All England final in 2015 by Carolina Marin.© AFP

Olympic medallists Saina Nehwal and P V Sindhu will aim to become only the third Indian to lay hands on the coveted All England trophy when they lead the country's challenge at the Super Series Premier tournament, starting with the qualifiers on Tuesday. Ever since Pullela Gopichand replicated Prakash Padukone's 1980 feat in 2001, no Indian has ever laid claim to the crown with Saina being the country's only shuttler to come close to achieving that rare feat when she reached the finals at 2015 before losing to Spain's Carolina Marin.

Back to full fitness after putting in the hard yards following a complete recovery from the knee injury, which had broken her Rio Olympics dream, Saina is now aiming to regain her position in world badminton and will be eager to dish out a power-packed performance at the Barclaycard Arena.

On the other hand, Sindhu, who became the toast of the nation after her historic silver medal at the Rio Olympics, will be keen to erase the memory of a first round exit in the last edition with another determined effort which helped her to claim her maiden title at China Open last year.

Both Saina and Sindhu have made a resounding start to the new season with titles at Malaysia Masters and Syed Modi Grand Prix Gold tournaments in January and they would now look to make a positive start to the Super Series circuit, which also includes events at India, Malaysia and Singapore.

Eighth seeded Saina, who fought back from a career-threatening knee injury in August to not only recover but start competitive badminton in November, will face defending champion Japan's Nozomi Okuhara, who is nursing a shoulder injury. She last played in November where she withdrew half-way through her first round encounter.

"I was runners-up in 2015 All England Championship but facing Carolina (Marin) was a very big task. She overpowered me and won the title. I am fine and well-trained now so I am ready to face my opponents," World No. 10 Saina said.

In the form of her life, sixth seed Sindhu will face Denmark's Mette Poulsen in the opening round and is likely to meet world No. 1 and top seed Tai Tzu Ying of Chinese Taipei at the quarterfinals if she doesn't suffer any hiccups.

"I consider the All England like any normal Super Series tournament. As a player, I would be playing the same players who I play in other Super Series matches tournaments, so it is the same for me, and I would look to do well," Sindhu said.

In men's singles, Rio Olympics quarterfinalist K Srikanth, who is on a comeback trail after recovering from an ankle injury, will look to put his best foot forward after a pre-quarterfinal finish at the German Open last week.

Prannoy will face China's Qiao Bin and Jayarammeets China's Huang Yuxiang, while Srikanth will square off against a qualifier in the opening round.

World No. 13 pair of Pranaav Jerry Chopra and N Sikki Reddy will face Korean combination of Yoo Yeon Seong and Kim Ha Na, while Rio Olympians Manu Attri and B Sumeeth Reddy will take on a qualifying pair.

Comments
Topics mentioned in this article
Saina Nehwal PV Sindhu Carolina Marin Badminton
Get the latest Cricket news, check out the India cricket schedule, Cricket live score . Like us on Facebook or follow us on Twitter for more sports updates. You can also download the NDTV Cricket app for Android or iOS.