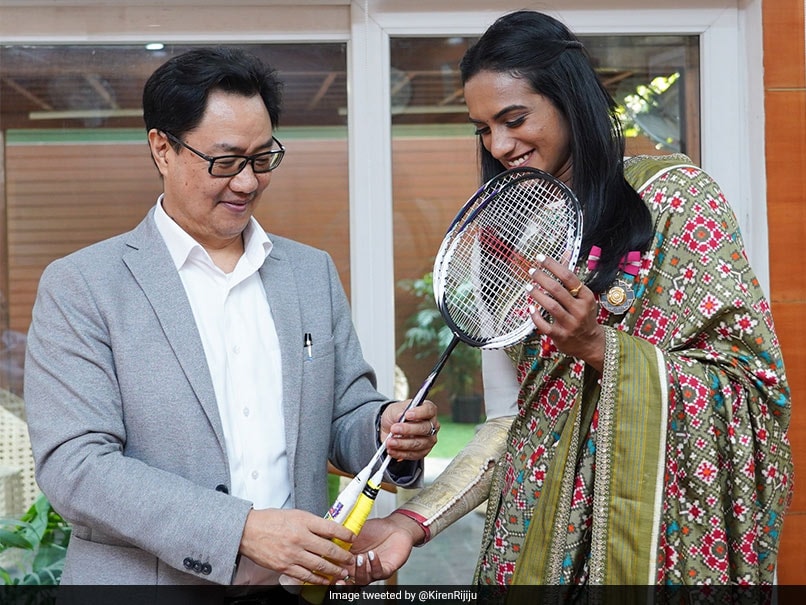 Tokyo Olympic bronze medallist PV Sindhu on Monday gifted badminton racquets to Union Law Minister Kiren Rijiju. The Minister uploaded a video on his Twitter account in which Sindhu can be seen gifting one of racquets to him. The shuttler also taught the Minister how to wrap the racquet handle grip. "Huge honour for sports fraternity as @Pvsindhu1 is conferred with Padma Bhushan Award for her achievements in sports for India. Congratulations !!Thank you Sindhu for gifting me top quality badminton rackets & also for teaching me how to wrap the racket handle grip," tweeted Rijiju.

"It is a proud moment. I am very thankful to the Government of India, all of the ministers and President sir for giving me this award. I am very very happy, these kinds of awards give us a lot of encouragement, support and motivation to do much better in the coming future," PV Sindhu told ANI after receiving the Padma Bhushan award.

Sindhu has already been the recipient of Padam Shri in 2015, India's fourth-highest civilian award and highest sporting honour of India, Khel Ratna award in 2016.

Post Rio 2016 silver medal, Sindhu went on to win medals at both the 2018 Commonwealth Games and Asian Games. In 2019, she became the first Indian to win the World Badminton Championships beating Nozomi Okuhara in the finals.

In 2021, Sindhu took a giant leap as she etched her name in the sporting history of the country after she clinched the bronze medal in the women's singles competition at Tokyo 2020. With that bronze, Sindhu became the first woman from India to become a double Olympic medallist.

The reigning world champion defeated He Bing Jiao of China 21-13, 21-15 for the badminton women's singles bronze at Tokyo 2020.

PV Sindhu was last seen on court in October when she crashed out of the French Open 2021 after losing to Japan's Sayaka Takahashi in the semi-finals.

PV Sindhu Badminton
Get the latest updates on ICC Women's Cricket World Cup 2022 and IPL 2022, check out the Schedule , Live Score and IPL Points Table. Like us on Facebook or follow us on Twitter for more sports updates. You can also download the NDTV Cricket app for Android or iOS.