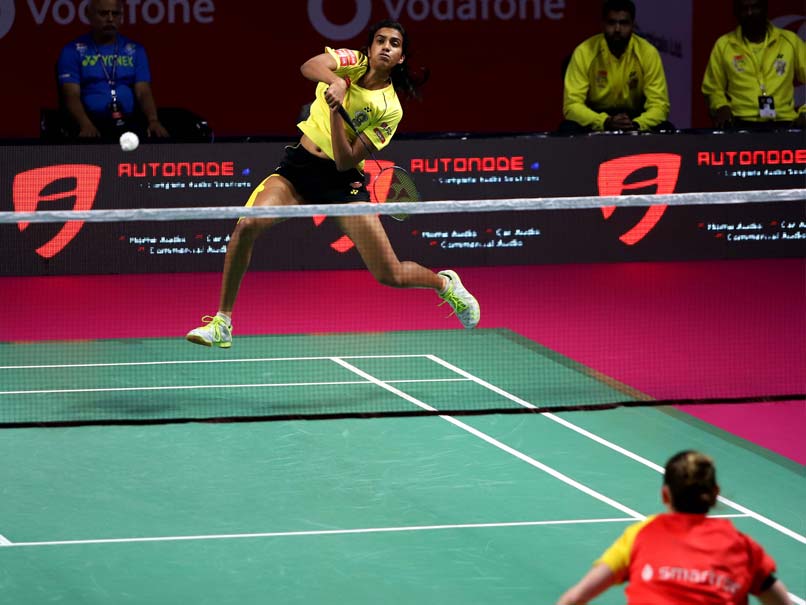 PV Sindhu's victory in the trump match gave Chennai Smashers a lead in the game.© PBL

PV Sindhu's Chennai Smashers beat Bengaluru Blasters 3-2 in a Premier Badminton League (PBL) match on Monday to keep their slim hopes of advancing to the knockout stages alive. Sindhu had set the tone for the home team, brushing aside the challenge of Kirsty Gilmour 15-9, 15-14 after the doubles team of Lee Yang and B Sumeeth Reddy had snatched a win in the Blasters' trump match. With Sindhu's victory in the trump match, the Smashers took a huge lead in the tie after two completed encounters. World No.1 Viktor Axelsen fought back for the Blasters and held off Tanongsak Saensomboonsuk 15-11, 6-15, 15-9 to earn the team's first point of the night.

Two more victories for Blasters helped reduce the margin of defeat but more importantly the team on top of the standings (on 15 points). Chennai Smashers, meanwhile, climbed to the third spot with 12 points after having been at the bottom prior to the tie.

The Bengaluru team would have to thank debutant Subhankar Dey and the mixed doubles team of Sikki Reddy and Kim Sang Rang for winning and securing two vital points.

Dey had upset highly rated Frenchman Brice Leverdez in straight games 15-12, 15-12 while Reddy and Rang beat Sindhu and Chris Adcock 15-14, 15-11 in the final match of the night.

Earlier in the evening, taking the court after the Smasher' duo of Lee Yang and B Sumeeth Reddy had upset the formidable Blasters team of Mathias Boe and Kim Sang Rang in the opening men's doubles, Sindhu overcame the challenge of Gilmour to put her team in control.

Yang and Sumeeth bounced back after losing the first game of Bengaluru's trump match to win 8-15, 15-14, 15-13 much to the delight of the home fans. It was the first loss for Boe and Rang in the League.

Gilmour got off to a rapid start against Sindhu and jumped to a 4-1 lead before the Indian ace fought back. Yet, the Blasters shuttler held the edge when they headed into the first break at 8-6.

Sindhu was a transformed player after the break and notched up one point after the other as her rival seemed to struggle. A 22-shot rally saw her level things up at 8-all.

She won seven points on the trot before Gilmour won another point. Sindhu quickly closed out the first game at 15 -9.

The second game saw the Indian shuttler gain the early advantage with some fluent cross-court shots before Gilmour hit back to get close.

Sindhu raised her game and raced to a 13-9 lead and the end seemed near. However, Gilmour had different ideas and she took four straight points to level things.

After the two won a point each, the game was tantalisingly poised before the Chennai Smashers captain claimed the golden point to put the team firmly in control.

Tanongsak Saensomboonsuk put up a fight against world No.1 Axelsen and went down in three games.

Axelsen showed his class and cruised to victory in the opening game. However, the Thai left-hander turned the tables in the second and won it 15-6 with a superb performance.

However, Axelsen asserted his superiority in the decider, taking it 15-9 to begin the Blasters' comeback.

Comments
Topics mentioned in this article
PV Sindhu Viktor Axelsen Badminton
Get the latest updates on ICC T20 Worldcup 2022 and CWG 2022 check out the Schedule, Live Score and Medals Tally. Like us on Facebook or follow us on Twitter for more sports updates. You can also download the NDTV Cricket app for Android or iOS.