Pune 7 Aces suffered their second successive loss of the tournament. 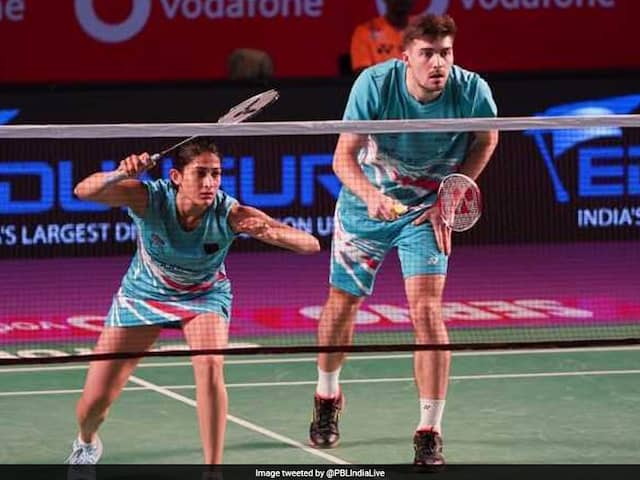 Ashwini Ponappa and Christiansen Mathias romped to a 15-8, 11-15, 15-12 victory over the rivals Vladmir Ivanov and Line Hjmark Kjaersfeldt in the mixed doubles match to hand their team Awadhe Warriors 4-3 win against Pune 7 Aces in the Premier Badminton League in Mumbai on Monday. The scores were levelled at 3-3 before the mixed doubles game and then under pressure the duo of Ponappa and Mathias won the close game to hand Pune their second successive loss of the tournament. Pune 7 Aces had lost their opening tie against Hyderabad Hunters on Saturday.

Ponappa and Mathias were tested in their match by the Pune's mixed doubles pair, but in the end the duo held their nerves to come out triumphant despite losing the second game.

Before Marin's and Sen's matches, Pune 7 Aces were trailing 0-3, but then Marin and Sen won their respective women's singles and second men's singles matches to level thescores to 3-3. While Marin overcame her opponent Beiwen Zhang in straight sets (15-13, 15-9), Sen got better of his South Korean rival Dong Keun Lee, who is world ranked 27th also in straight sets (15-11, 15-8).

Also Marin's match was Pune's trump match and her win meant that their side got the much-needed two points. Marin, who had lost her first game of the tournament against PV Sindhu, was under pressure to perform. But the only woman to win the World Championships thrice, the Spanish shuttler meant business and routed Zhang after trailing 7-9 in the first game.

Marin then raised the pace of rallies and moved quickly as she pocketed the second game with ease and the match.

Son was in his elements in the second game after taking the first game which went down the wire. Since it was Awadhe's trump game, Son's victory gave the side 2 points and they went 2-0 up.

Son's good work was carried forward by the men's doubles pair of Yang Lee (from Taiwan) and Christiansen Mathias (from Denmark) who defeated the challenge posed by the Pune 7 Aces pair of Mathias Boe (from Denmark) and 31-year-old Russian Vladimir Ivanov in straight sets 15-12 and 15-14.

Boe and Ivanov, who lost the first game, made a splendid comeback in the second game to make it 14-14 after they were trailing 5-9, but their opponents held their nerve to clinch the deciding point and take the tie 15-14. Their win gave Awadhe Warriors 3-0 lead.

The PBL action now shifts to Hyderabad from Tuesday,where games will be held at the Gachibowli Indoor stadium till December 28.