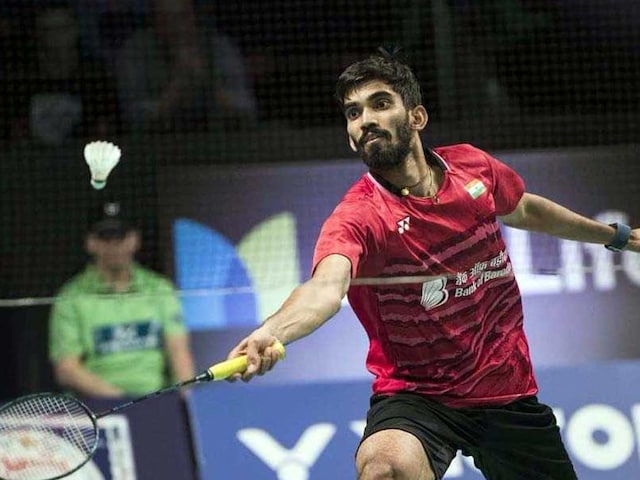 Kidambi Srikanth is ranked three in the world at the moment.© AFP

Indian badminton is entering a golden era with an army of new stars aiming for Commonwealth Games and Asian Games success this year, the country's top-ranked star Kidambi Srikanth has warned rivals. With Srikanth ranked three in the world, HS Prannoy 11th and Sai Praneeth 14th, India have as many men in the world top 15 as traditional powerhouse China. For the women, PV Sindhu is ranked four and Saina Nehwal 11th -- and they are both Olympic medal winners.

"We have five or six very good men's singles players and with Saina and Sindhu doing extremely well and doubles players adding to it, it is a very good pool we have," Srikanth told AFP in an interview in New Delhi.

"Probably we have the best set of players in the last 10 years or so," he said.

India have had individual badminton heroes such as Prakash Padukone, the first Indian to win the All England men's title in 1980, and national coach Pullela Gopichand, but never such a large group of talent at the same time.

Srikanth last year became the first Indian to win four SuperSeries world tour titles in a year and jumped to a career-best second in men's rankings before suffering a leg injury.

The 24-year-old recovered in time to compete in the India Open this month but surprisingly lost in the second round to Malaysian qualifier Iskander Zulkarnain.

Srikanth shot to prominence by defeating Chinese great Lin Dan to win the China Open in 2014. Lin beat the Indian in the quarter-finals of the Rio Olympics two years later. Srikanth still has his sights set on an Olympic medal though.

The 25-year-old, who was introduced to badminton by his elder brother K Nandagopal knows he must first focus on the Commonwealth Games in Australia in April and the Asian Games in Indonesia in August.

"Obviously winning the Olympic medal is my biggest dream. But I really don't want to think too much about 2020 right now," said Srikanth.

"It's really important for us to be consistent with events and those big medals."

Srikanth has a close rivalry with world number one Viktor Axelsen of Denmark. The two have played each other seven times with the tall Dane just ahead on four wins.

But the Indian says he doesn't think about world rankings or put pressure on himself to try to get to number one.

"Viktor is someone who uses his height very well. For me its about being aggressive and playing long matches," said Srikanth.

"Maybe I will think about (the rankings) after I retire," Srikanth smiled.