Olympics medallists PV Sindhu and Saina Nehwal crashed out of the USD 325,000 Japan Open Superseries after suffering straight-game defeats in second round on Thursday. 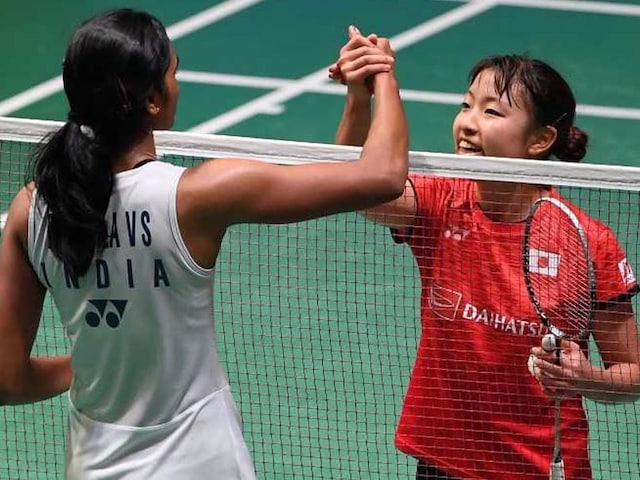 PV Sindhu lost in straight games to Nozomi Okuhara in round 2 of Japan Open Superseries.© AFP

Olympics medallists PV Sindhu and Saina Nehwal crashed out of the USD 325,000 Japan Open Superseries after suffering straight-game defeats in second round on Thursday. However, Kidambi Srikanth and HS Prannoy advanced to the quarterfinals of the men's singles. Playing local favourite and world champion Nozomi Okuhara for the third consecutive time, Sindhu could not bring to the fore her best game and committed too many errors to go down 18-21 8-21 in a lop-sided 47-minute contest.

The match lacked the long intense rallies, which were the hallmark of their last two contests -- the 110-minute World Championship final and last week's 83-minute Korea Open summit clash, which Sindhu had won.

Rio Olympics silver medallist Sindhu squandered a lead of 11-9 and 18-16 in the opening game and looked completely out of sorts in the second game to bow out early.

London Games bronze medallist Saina too squandered a 14-10 lead in the opening game and a 6-4 advantage in the second to go down 16-21 13-21 to Olympic champion Carolina Marin of Spain, seeded fifth.

However, World No.8 Srikanth, who clinched back-to-back titles in Indonesia and Australia this year, demolished Hong Kong's Hu Yun 21-12 21-11 within half an hour to make it to the final eight.

The Indian will now face the recently-crowned world champion Viktor Axelsen of Denmark.

Currently locked 2-2 in the head-to-head record, Srikanth had initial success against Viktor but the Dane had an upper hand in the last two meetings, winning in straight games.

"It was a good match. He can be very dangerous if you give him a chance, so I wanted to play very consistent," said Srikanth.

World No. 2 Shi, who had reached the finals of All England Championship early this year, staved off a challenge from Syed Modi International winner Sameer Verma 10-21 21-17 21-15 in another match.

Among others, the mixed doubles pair of Ashwini Ponnappa and Satwiksairaj Rankireddy played their heart out before losing 27-29 21-16 12-21 to Indonesian fourth seeds Praveen Jordan and Debby Susanto in a match that lasted an hour and six minutes.

Sindhu led 6-2 early on but Okuhara closed the gap to 8-9 before Sindhu's straight return bamboozled the Japanese. The Indian failed to negotiate a cross-court return from Okuhara, who miscued a stroke to the net to give a 11-9 advantage to the Indian at the break.

Okuhara quickly erased the deficit and grabbed a 12-11 lead after winning a long rally with a deceptive return. The Japanese continued to dominate as she unleashed a body smash and then won a video referral to move to 15-11.

Sindhu broke the run of play with a cleverly set-up point where she used a cross court flick followed by a push at the back court.

The Indian used the wristy flick at the net to narrow the margin to 14-15 and then clawed back when the local favourite hit long.

A whipping smash and then aided by Okuhara's two returns going to the net saw Sindhu lead 18-16. But the Indian failed to make use of the advantage as Okuhara reeled off four straight points, the final stroke an on-rushing over-the-head smash to earn the bragging rights.

After another self-talk, Okuhara once again started her duel with the Indian, opening up a 3-0 lead, which she extended to 9-3.

Sindhu failed to reign in her errors, allowing Okuhara to move ahead. The Japanese eventually led 11-4 after producing a smash.

Frustration was writ large on her face as Sindhu found the net after the interval. The Indian continued to find the going tough as Okuhara led 16-5 before Sindhu again found the net.

Sindhu continued to falter with her strokes and the result was Okuhara led 19-7. With another return getting buried at the net, it was 12 match-point advantage for Okuhara, who sealed it quite easily in the end.

Comments
Topics mentioned in this article
PV Sindhu Badminton Kidambi Srikanth HS Prannoy
Get the latest Cricket news, check out the India cricket schedule, Cricket live score . Like us on Facebook or follow us on Twitter for more sports updates. You can also download the NDTV Cricket app for Android or iOS.