Kashyap will be up against Viktor Axelsen in Saturday's semi final, while Srikanth will face China's Huang Yuxiang. 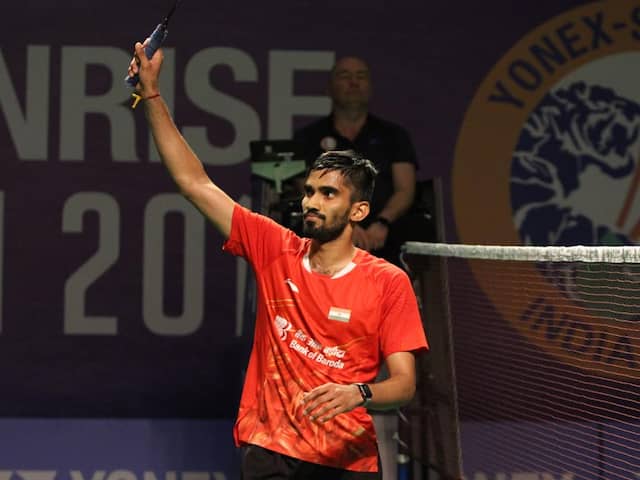 Ace shuttlers Kidambi Srikanth and Parupalli Kashyap kept Indian hopes alive by advancing to the semifinals of the India Open, a BWF World Tour Super 500 tournament, here on Friday. Danish Victor Axelsen, who was too good for HS Prannoy, will be up against Kashyap in Saturday's semi final, while Srikanth will face China's Huang Yuxiang. In the women's section, PV Sindhu, playing the last match at the KD Jadhav Hall 1 on Friday, beat eighth seed Mia Blichfeldt 21-19, 22-20 to sail through to the last four.

In a riveting all-India encounter, 2015 champion Srikanth edged past Sai Praneeth 21-23, 21-11, 21-19 in one hour and two minutes for just his third win in eight meetings over the former Swiss Open runner-up.

Kashyap, 32, then turned back the clock to reach his first semifinal in a World Tour 500-level tournament in nearly four years with a comfortable 21-16, 21-11 victory over Wang Tzu Wei of Chinese Taipei.

After Praneeth built an early lead of 5-2, Srikanth cut down on his errors and drew level at 13-13 only to concede an 18-14 advantage. The former champion did save three game points but Praneeth held on to close out the game 23-21.

Though Praneeth raced to a 7-1 lead in the second game, it could not deter Srikanth who made a spirited comeback to inch ahead 15-11. He then won the next six points to take the game 21-11.

In the decider, Praneeth took a 13-10 lead, but Srikanth's patience brought him back into contention. In a tense ending, Srikanth's lob at 19-19 landed right on the backline to give him a match point which he duly converted.

"After losing the first set and trailing 1-7 in the second, coming back to take a 8-7 lead was the turning point," said Srikanth after the match.

"After 1-1, I gave him too many one stroke points and there were no rallies. So I thought to build rallies and fight it out for every point and not to concede any easy point," he added.

Former Commonwealth Games gold medallist Kashyap showed enough glimpses of his younger self by building a 9-6 lead in the first game against World No. 32 Wang Tzu Wei.

The Chinese Taipei shuttler did make a brief comeback but Kashyap's deft touches at the net handed him the first game 21-16.

Wang could not provide much resistance in the second game as Kashyap completed the 21-16, 21-11 win in just 39 minutes.

"My body is feeling a little at ease than in the last few weeks. Maybe the training I've done recently put my body in a better shape," Kashyap said after the macth.

The former national champions were the last Indian pair standing in the doubles section after Ashwini Ponnappa and Sikki Reddy lost to Indonesian top seeds Greysia Polii and Apriyani Rahayu 10-21, 18-21.

After being outplayed in the first game, an aggressive approach helped Ponnappa and Reddy turn it around in the second as they built a 11-6 lead. However, the top seeds came back strongly to wrap up the match in 37 minutes.

Comments
Topics mentioned in this article
PV Sindhu Kidambi Srikanth Parupalli Kashyap Badminton
Get the latest Cricket news, check out the India cricket schedule, Cricket live score . Like us on Facebook or follow us on Twitter for more sports updates. You can also download the NDTV Cricket app for Android or iOS.