Srikanth will play Taiwan's Chou Tien-chen in his second group B match on Thursday. Sindhu will take on Japanese Sayaka Sato on Thursday in her group A encounter. 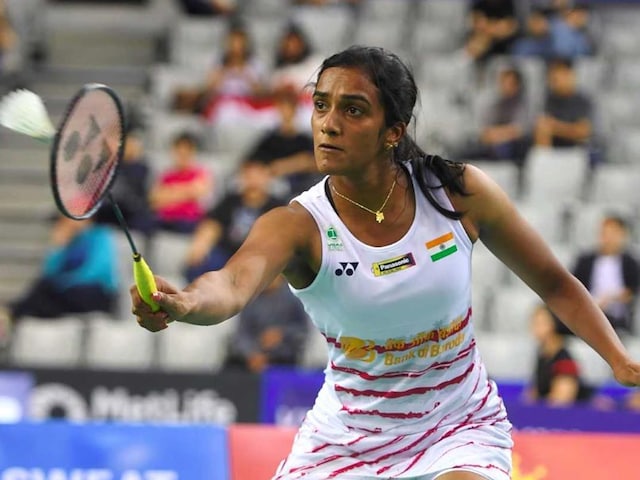 PV Sindhu got off to a winning start in the Dubai World Superseries Finals 2017 on Wednesday. She brushed aside her Chinese opponent He Bingjiao 21-11, 16-21 and 21-18 in her first group A match. However, shuttler Kidambi Srikanth lost his opening match to Denmark's Viktor Axelsen 13-21, 17-21. Srikanth will play Taiwan's Chou Tien-chen in his second group B match on Thursday. The 22-year-old Sindhu, who had a 4-5 head-to-head record against World No. 9 He Bingjiao, dished out a gritty performance to overcome the left-handed Chinese 21-11 16-21 21-18 in a Group A match that lasted an hour and four minutes. World No. 4 Srikanth, however, couldn't bring out his top game as he suffered a 13-21 17-21 loss to World No. 1 and defending champion Viktor Axelsen in a Group B men's singles match that lasted just 38 minutes.

Sindhu faces Japan's Sayaka Sato next, while Srikanth will take on Chinese Taipei's Chou Tien Chen tomorrow. Playing an opponent she has faced twice this year, Sindhu showed good defence as she engaged her rival in rallies by putting the shuttle in awkward positions and tried to close out the points.

Sindhu showed immaculate defence to counter Bingjiao's strokes and pushed the Chinese to commit errors. The Indian led 10-6 when the Chinese produced a cross court return but she hit the net next as Sindhu held the advantage at the break.

Sindhu continued to dominate the proceedings after the break, moving 17-8 ahead when Bingjiao committed a judgemental error at the baseline. Sindhu grabbed nine game points when her opponent hit long and closed out the game with a cross court smash.

In the second game, Bingjiao surged to 4-0 lead early on before Sindhu drew parity at 7-7 but the Chinese once again moved ahead to 10-7 when the Indian hit wide. Bingjiao eventually held a slender 11-9 lead at the break.

After the breather, Sindhu produced a perfect placement and then Bingjiao hit out twice as Sindhu enjoyed a 12-11 lead. The Chinese once again turned the tables, leading 14-12 and won a video referral and produced a couple of superb drop shots to make it 17-13 in her favour.

A whipping return at the forecourt gave a point to Sindhu but the Chinese managed to soon reach 20-15. The Indian saved one game point before the Chinese sealed it with another delectable return.

In the decider, Bingjiao led 4-2 initially but Sindhu clawed back at 5-5 when the Chinese sent the shuttle to the nets. The Indian soon started controlling the rallies and eventually grabbed a 11-7 lead at the break. Bingjiao continued to breath down Sindhu's neck with her attacking game, narrowing the deficit to 16-17 after the interval.

A good judgement at the baseline after another fierce rally took Sindhu to 18-16. The Indian then earned four match points with Bingjiao going wide and long. Bingjiao saved two match points before Sindhu sealed the issue when Bingjiao faltered at the net again.

In the men's singles match, Srikanth seemed of-colour as Axelsen towered over the Indian with his better agility and placement. Srikanth, who had snapped a three-match losing streak against the Dane with a win at the quarterfinals of Denmark Open, dominated the proceedings early on and lead 8-4 at one stage. He put Axelsen out of position with his returns to lead 10-7.

However, an attacking return by Axelsen followed by a wide shot by Srikanth helped the Dane to narrow the gap to 9- 10, before Srikanth entered the break with two-point advantage when his rival found the net.

After the breather, Axelsen came out with all guns blazing even as errors crept in Srikanth's game. His crosscourt returns, low lifts at the net -- all went wide and long. He also committed a fault when his racquet touched the net during a return.

With Srikanth failing to curb his errors, Axelsen zoomed to massive seven game points with a whipping smash. Axelsen then produced an acute angled return to leave the Indian stranded.

Axelsen continued to rule the roost in the second game, surging to 5-1 lead at one stage. Srikanth tried to break his opponent's rhythm but the Dane managed to grab a five-point advantage at the interval. After the break, Srikanth produced an incredible return diving to his right and then won another point when Axelsen hit wide.

Then the Indian managed to narrow the gap to 12-14 when Axelsen unleashed another big smash to grab a point. A slice gone wide was cancelled by a superb follow-up shot by Srikanth, who produced an accurate return at the baseline. But once again errors came back to haunt Srikanth as Axelsen grabbed the match point with a superb placement and then sealed the match when the Indian hit the net.