Commonwealth Games 2018: PV Sindhu Asserts Pressure Of Expectations Not So Hard To Deal 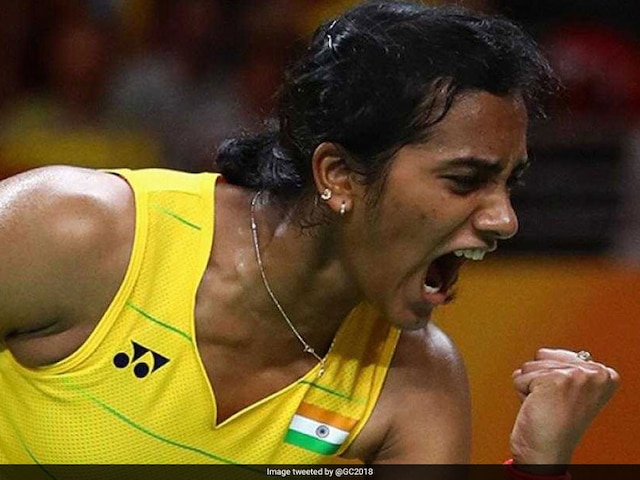 Ace Indian shuttler PV Sindhu, one of country's brightest gold medal prospects at the Commonwealth Games, is not new to handling pressure. The top-ranked women's singles badminton player at Gold Coast, says she is not bogged down by pressure of expectations. World No.3 Sindhu, the 2016 Olympic silver medallist, will also spearhead India's campaign in the mixed team event. "Pressure and responsibility is always there, but you just have to play your game and give your best," the three-time World Championships medallist was quoted as saying by the Gold Coast CWG's official website on Tuesday. "You don't have to take on that pressure. I know people expect a lot from you but it's not so hard to deal with it," she added.

Sindhu's main rivals for gold next week are likely to be familiar faces. At the Glasgow 2014 Commonwealth Games Sindhu was beaten in the semi-finals by Canada's Michelle Li, who went on to defeat Scot Kirsty Gilmour in the final. Sindhu's veteran compatriot Saina Nehwal is also a strong challenger.

"They are good players, it's not easy to play against them," the 23-year-old said. "You have to have a strategy. You just can't play easy and think you will win easily."

But she didn't mind giving warning to her opponents. "There have definitely been a lot of changes and improvements in my game since 2014," the Hyderabadi insisted.

India's men's singles players Kidambi Srikanth and HS Prannoy are also medal prospects having proven their mettle and the world circuit. India had failed in Glasgow in the mixed team event and this time, riding on the singles superstars, India will aim for a podium finish.

"India has been doing really well this year. In the men's, there are five or six players in the top 50," Sindhu said. "We hope we can come back with lots of medals."

Comments
Topics mentioned in this article
PV Sindhu CWG 2018 Badminton
Get the latest Cricket news, check out the India cricket schedule, Cricket live score . Like us on Facebook or follow us on Twitter for more sports updates. You can also download the NDTV Cricket app for Android or iOS.