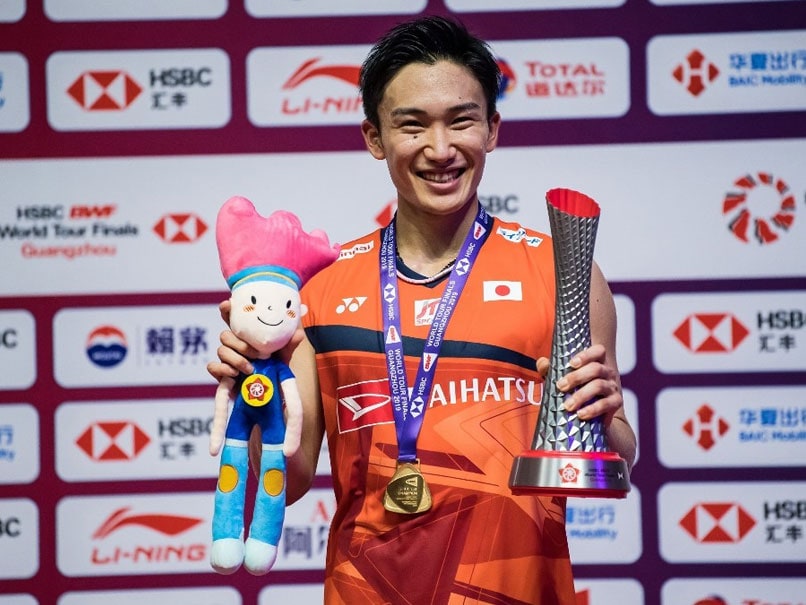 Kento Momota fought back from a game down to win a record 11th title of the year.© AFP

World number one Kento Momota fought back from a game down to win a record 11th title of the year on Sunday with victory at the BWF World Tour Finals. The peerless Japanese player defeated Indonesia's Anthony Ginting 17-21, 21-17, 21-14 in 87 high-quality minutes in the final at the season-ending showpiece in Guangzhou. Momota celebrates a new mark in men's badminton, overtaking Malaysian great Lee Chong Wei's 10 tournament wins in 2010.

"At this World Tour Finals I played carefully from the first match partly with the aim of winning an 11th title," the 25-year-old Momota said.

"Even in tough games I did not give up."

Momota was pushed all the way by the speedy Ginting and the Japanese fell 12-5 down in the deciding third game to the world number eight.

However, the reigning two-time world champion surged back.

Ginting was trailing 17-14 when he called the doctor on court for treatment on his right foot.

The fading Indonesian continued but Momota rammed home his advantage to seal a stellar season in style.

The 23-year-old Ginting has now tasted defeat in all five of his finals this year.

"He led (in the deciding game) but I was patient," said Momota, who was banned for a year in 2016 for illegal gambling.

"And then I got to know that he was suffering pain so all I needed to do was stay calm."

Chen, who will replace Tai as world number one in the latest rankings, had lost 14 of their previous 15 clashes.

"I didn't think much about my 1-14 record against her, I had to focus on the task today."

Comments
Topics mentioned in this article
Badminton
Get the latest updates on India vs Australia and check out  Schedule, Results and Live Score. Like us on Facebook or follow us on Twitter for more sports updates. You can also download the NDTV Cricket app for Android or iOS.