Badminton star P.V. Sindhu to get support from celebrity-commerce firm

Having won the Malaysian Grand Prix recently, Sindhu is currently ranked at 13 by the Badminton World Federation and has been training under of P.Gopichand in Hyderabad. 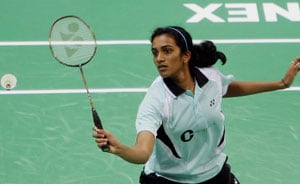 India's first celebrity-commerce firm - Collectabillia.com - has formally announced its association with teenage badminton sensation P.V.Sindhu, fresh from her victorious outing at the Grand Prix Gold tournament in Malaysia. Collectabillia.com will support the talented Sindhu and jointly work with her on brand connect beyond endorsements on an exclusive basis.

The Managing Director of the firm, Anjana Reddy, a former national junior player, said considering Sindhu's steady rise and potential, her firm has decided to support and form a professional relationship with her.

"The biggest hindrance to realising of the true potential of a talented Indian sportsperson is the lack of fiscal support and sporting ecosystem. I strongly believe that an athlete's sole responsibility is to concentrate on his/her game while we build a support system around that facilitates them to deliver to their potential at the world stage. We are excited to be associated with a dynamic talent like Sindhu and Collectabillia.com looks forward to supporting her future quests," said Reddy.

Sindhu is currently ranked at 13 by the Badminton World Federation and has been training under of Pulella Gopichand in Hyderabad. While dedicatedly climbing the rankings through the last few years, Sindhu along the way has defeated Olympic medalists and at 17, her feats make her a very strong contender at the Rio Olympics 2016.

Commenting on the association, Sindhu said, "As I continue to focus on improving my game, it is reassuring to have a strong foundation that can support me emotionally, substantially and monetarily. A combination of my parents, Gopi Sir and the support of Collectabillia provides for that solid foundation."

Comments
Topics mentioned in this article
Jwala Gutta Saina Nehwal PV Sindhu Sachin Ramesh Tendulkar Badminton
Get the latest updates on ICC T20 Worldcup 2022 and CWG 2022 check out the Schedule, Live Score and Medals Tally. Like us on Facebook or follow us on Twitter for more sports updates. You can also download the NDTV Cricket app for Android or iOS.