Djokovic is bidding to become the first player in the Open Era to win three consecutive Australian Opens and was in a different league to Mathieu, running through to his 15th straight match win in Melbourne. 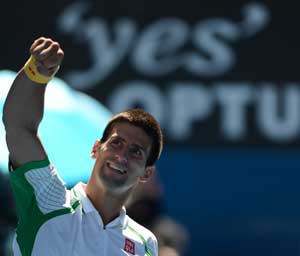 Novak Djokovic got his title defence off to a flying start with a straight-sets win in his opening match at the Australian Open on Monday.

The world number one had few worries in disposing of the 60th-ranked Frenchman Paul-Henri Mathieu, winning 6-2, 6-4, 7-5 in 1hr 42min on a sun-baked Rod Laver Arena.

Djokovic is bidding to become the first player in the Open Era to win three consecutive Australian Opens and was in a different league to Mathieu, running through to his 15th straight match win in Melbourne.

The Serb top seed did not drop serve and broke the Frenchman's service four times in a commanding performance ahead of his next round encounter with American Ryan Harrison.

In a dominant display, the 25-year-old Djokovic won 95 points to Mathieu's 68 and made a total of 31 winners outnumbering his 15 unforced errors.

Djokovic cleaned up 84 percent of his first service points and was a high 75 percent on his second serve points.

It was Djokovic's fifth win in six meetings with Mathieu, who was playing in his first Australian Open since 2009 after injury-blighted seasons in 2010 and 2011, and not recovering in time from knee surgery to play in Melbourne last year.

Djokovic is looking to bounce back from his US Open final defeat to Andy Murray in New York last September and is drawn to face the Scot in the semi-finals, and possibly 17-time Grand Slam champion Roger Federer in the final.

Djokovic needed a record 5hr 53min to overcome Rafael Nadal in last year's five-set epic Australian Open final, but Nadal is not in Melbourne this time as he recovers from a virus.

Comments
Topics mentioned in this article
Australian Open 2013 Tennis Australian Open 2014 Paul-Henri Mathieu Novak Djokovic
Get the latest Cricket news, check out the India cricket schedule, Cricket live score . Like us on Facebook or follow us on Twitter for more sports updates. You can also download the NDTV Cricket app for Android or iOS.