India vs Australia, 3rd Test: Will Pucovski made 62 while Marnus Labuschagne remained unbeaten on 67 as Australia finished Day One on 166/2. 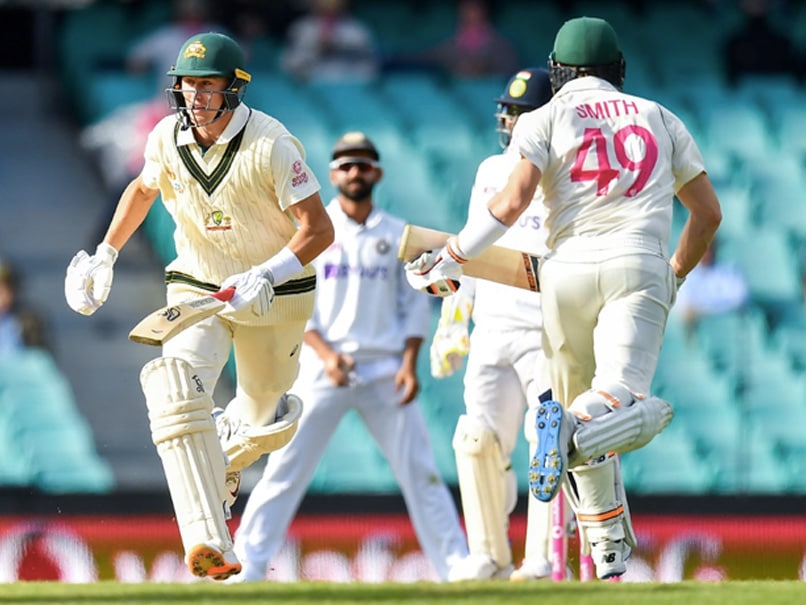 India vs Australia: Marnus Labuschagne remained unbeaten on 67 runs on Day One.© AFP

In signs ominous for India and encouraging for Australia, the beleaguered Steve Smith looked dangerous and his understudy Marnus Labuschagne struck an unbeaten half-century as the hosts reached 166 for 2 on a rain-marred opening day of the third Test In Sydney. At Stumps, Labuschagne was unbeaten on 67 and Smith, after his uncharacteristic run of low scores so far, seemed out of the woods with 31 confident runs, which included five authoritative boundaries. Labuschagne found the fence eight times. This was after debutant Will Pucovski, riding on some luck, made 62 on debut to break the shackles for the under-fire side.

Smith looked positive from the word go and was determined to not let the Indian bowlers dictate terms to him.

Having entered the match after registering scores of 1, 0 and 8 in his last three innings, Smith's first confident shot came against India's pace spearhead Jasprit Bumrah, who was nicely driven through the mid-on for his first boundary of the series.

His confidence up after dismissing Pucovski for his first Test wicket, debutant pacer Navdeep Saini got carried away and was guilty of bowling too full to Smith, who latched on to them with a couple of fours.

With Smith looking in fine fettle, the early signs were ominous for India and skipper Ajinkya Rahane brought back his nemesis Ravichandran Ashwin into the attack, but the Australian was equal to the task on this occasion.

A tossed up delivery was whipped off pads through mid-wicket and then Smith danced down the track to loft Ashwin on the onside for another boundary.

Meanwhile, Labuschagne was in his element after he had settled in and played a few pleasing drives on both sides of the wicket, having drawn confidence from the pull shot he played against Bumrah at the beginning of his innings.

The two added 60 runs for the third wicket after a 100-run association between Labuschagne and Pucovski, who was trapped in front of the wicket by Saini but not before starting his Test career with a solid knock.

Pucovski also had luck on his side as wicketkeeper Rishabh Pant dropped the opener twice before tea.

Pucovski was on 54 and Marnus Labuschagne on 34 at the tea break after four hours of play were lost due to rain.

In between three reprieves, Pucovski played some impressive shots and also looked solid in defence after Mohammed Siraj had sent back the returning David Warner early.

Introduced into the attack after 13 overs in India's first bowling change, senior off-spinner Ashwin tempted Pucovski into a drive and the batsman only managed an edge after losing his balance, but Pant failed to hang on to the offering despite getting his gloves to it in the 22nd over.

Pant spilled one more chance and on that occasion the unlucky bowler was Siraj, whose fast and short delivery touched the batsman's gloves on his way to the keeper, who could not complete the task.

Pant managed to take it on the second attempt, but the ball had hit the ground by then.

With luck on his side, Pucovski got to his fifty when he pulled another debutant, Navdeep Saini, through the wide mid-on region for a boundary.

Earlier, play resumed as the sun shone brightly after a four-hour rain interruption. Groundsmen at the Sydney Cricket Ground worked relentlessly, including using a blower to go with the super-sopper, to get the surface ready for resumption at 3pm local time.

As many as 35 overs were lost due to rain. Scheduled close of play was extended to 6.30pm with extra 30 minutes permitted to ensure minimum overs.

This was after young pacer Siraj dismissed Warner to leave Australia at 21 for one before the inclement weather stopped play barely seven overs into the first day's action.

The home team had batted for only 7.1 overs when play was interrupted.

Siraj sent back Warner (5) when he had the seasoned opener caught behind by Cheteshwar Pujara at first slip in the fourth over, giving India their first breakthrough before the heavens opened up.

The players ran off the field as a shower arrived from nowhere, forcing the groundsmen to cover the pitch as well as the square.

Making a return after a long injury layoff, Warner showed intensity in the first few overs but got carried away as he chased a wide Siraj delivery.

On the other had, barring a couple of uncomfortable moments against the shorter balls, Pucovski looked solid in the middle after Australia won the toss and opted to bat in the penultimate match of the four-match series.

Rohit Sharma returned to the Indian playing XI in place of Mayank Agarwal, while Saini was handed a Test debut, replacing an injured Umesh Yadav.

Ravichandran Ashwin Navdeep Saini Australia vs India 2020-21 Australia vs India, 3rd Test Cricket
Get the latest updates on ICC T20 Worldcup 2022 and CWG 2022 check out the Schedule, Live Score and Medals Tally. Like us on Facebook or follow us on Twitter for more sports updates. You can also download the NDTV Cricket app for Android or iOS.