Steve Smith still leads the ICC Test rankings for batsmen with 911 points, while Virat Kohli at second place moved up to 888 points. 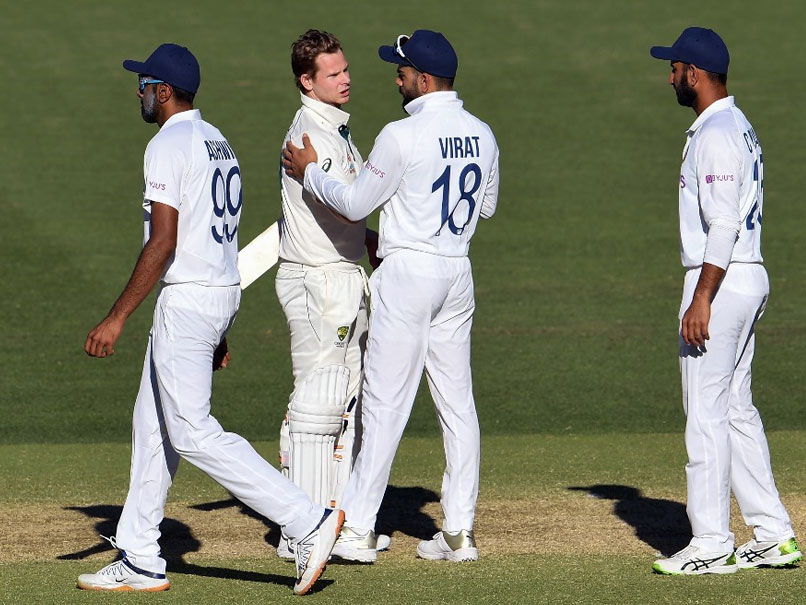 Virat Kohli had a better outing with the bat than Steve Smith even as Australia beat India in Adelaide.© AFP

Despite India's defeat to Australia in the first Test in Adelaide, Virat Kohli's first innings knock of 74 helped him close the gap to Steve Smith at the top of the ICC Test rankings for batsmen. Steve Smith was dismissed for just one run in Australia's first innings, while he stayed unbeaten on the same score in their second outing with the bat. The former Australia captain lost 10 points, while Kohli -- who top-scored in the Test -- gained two points, as the gap between the two top-ranked batsmen fell from 25 to 13 points.

While Smith is still perched atop the batting charts with 911 points, Kohli now has 888 points. However, Smith may extend his lead further during the series, with Kohli set to miss the remaining three matches due to his paternity leave.

Marnus Labuschagne's 47 and 6 saw him reach his career-best 839 points, but he stays behind New Zealand's Kane Williamson at fourth place.

Cheteshwar Pujara, despite his patient 43 in the first innings, dropped a spot to go 8th in the rankings, with England all-rounder Ben Stokes overtaking him.

Australia captain Tim Paine's unbeaten innings of 73, which saw him win the Player of the Match award in Adelaide, lifted him to a career-best of 33rd place with 592 points.

Pat Cummins, meanwhile, extended his lead atop the bowling charts after taking seven wickets in the match. He moved from 904 points to 910, with a 65-point lead over second placed Stuart Broad.

Josh Hazlewood's 5-wicket haul in the second innings saw him rise four places to the 5th spot, while Ravichandran Ashwin moved up by one spot to 9th in the bowling charts.

Josh Hazlewood Cricket
Get the latest updates on Fifa Worldcup 2022 and check out  Fifa World Cup Schedule, Stats and Live Cricket Score. Like us on Facebook or follow us on Twitter for more sports updates. You can also download the NDTV Cricket app for Android or iOS.