Ravichandran Ashwin is currently in Australia for India's tour, and is part of the Test team. The first Test match begins on December 17, in Adelaide. Currently in Australia for India's ongoing tour, Ravichandran Ashwin took to social media to post an adorable photo with his daughter. The post was also on the receiving end of plenty of love from the spinner's wife Prithi Narayanan, who commented with numerous heart emoticons. The 34-year-old spinner is part of India's Test team. He also recently played in the first practice match against Australia A, but was rested for the ongoing second tour game, at the Sydney Cricket Ground. Posting the photo on Instagram, Ashwin captioned it as, "'A' Team! @prithinarayanan". Here is the photo: 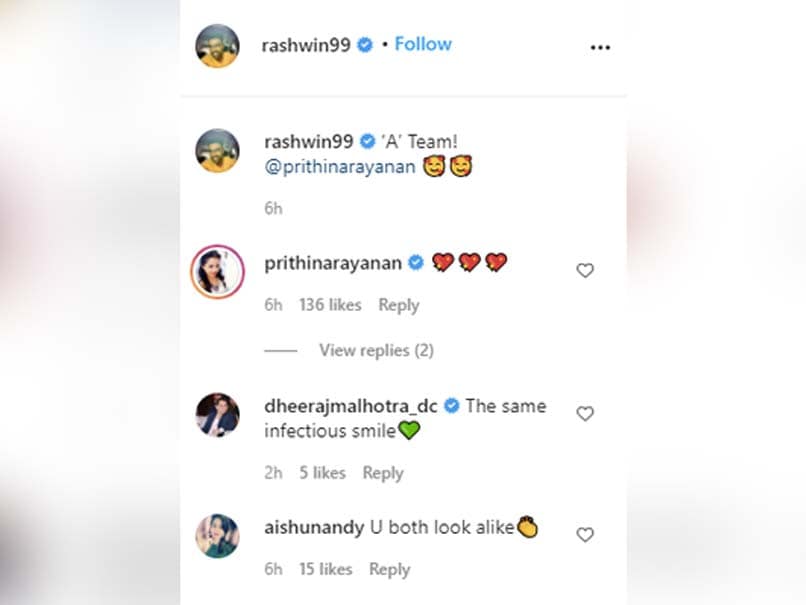 The post went down well with fans, with many pointing out the cuteness factor in the beautiful photograph.

Ashwin was part of DC's Indian Premier League (IPL) 2020 campaign, in the United Arab Emirates (UAE). Roped in from Kings XI Punjab (KXIP) ahead of the season, he was DC's third highest wicket-taker in the UAE.

A veteran in India's Test unit, Ashwin has the ICC Test Player of the Year award in his cabinet, which he bagged in 2016. He will be hoping to help the visitors to victory in the four-match series, which begins from December 17.

The third Test match is on January 7-11, at the Sydney Cricket Ground, followed by the fourth match, which starts on January 15, at the Gabba.

Ravichandran Ashwin Australia vs India 2020-21 Australia vs India, 1st Test Cricket
Get the latest updates on ICC T20 Worldcup 2022, check out the Schedule and Live Score. Like us on Facebook or follow us on Twitter for more sports updates. You can also download the NDTV Cricket app for Android or iOS.