India vs Australia: Justin Langer came out in defence of Tim Paine and Steven Smith after they copped criticism for bad behaviour during the Sydney Test. 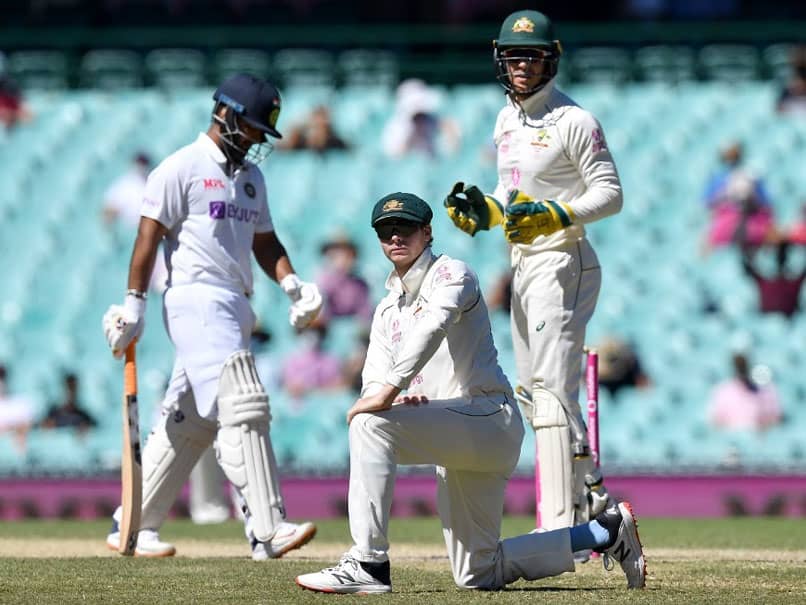 India vs Australia: Tim Paine and Steve Smith were criticised for bad conduct during the Sydney Test.© AFP

Australia coach Justin Langer gave under-fire skipper Tim Paine his "100 percent" support and blasted criticism of Steve Smith as "absolute rubbish" Wednesday after a backlash against the pair's behaviour in the drawn third Test against India in Sydney. Paine's captaincy has been questioned after he launched an ugly verbal tirade at India's Ravichandran Ashwin and Smith was criticised after appearing to scuff up batsman Rishabh Pant's guard at the crease during a tense final day. But an indignant Langer was having none of it.

"Do I have faith in Tim Paine? You have no idea how much faith I have in Tim Paine," he said.

"He didn't have his best day, no doubt about that, but after three years he has hardly put a hair out of place.

"He has been outstanding as the Australian captain in everything he does. He had a frustrating day and we have got to cut him some slack, surely."

Wicketkeeper Paine, guilty of dropping three catches on the final day, has apologised and admitted frustration got the better of him when he tried to unsettle Ashwin, who held out for more than three hours for an unbeaten 39 as the tourists salvaged a draw.

Stump microphones picked up Paine making a series of barbs at Ashwin.

Paine had already been fined for dissent after an expletive-laden rant at umpire Paul Wilson on day two, with the incidents undermining Langer's drive to revamp the team's toxic culture after the "Sandpaper-gate" ball-tampering scandal in 2018.

While backing Paine to continue as captain "for some time yet", Langer also acknowledged criticism would come if anyone deviated from the high standards the team now set themselves.

"When you set a standard as high as he does, and we do, we understand we get criticised when you fall below that. It's not what we are about," he said.

"But Tim is an outstanding leader and will continue to be for some time to come yet. He has my 100 percent support."

Footage of Smith, who was Australia's captain during the sandpaper scandal and banned for year, suggested he deliberately interfered with Pant's batting guard -- a mark made at the crease to know where your feet are in relation to the wicket behind you.

The number four is renowned for his quirks, including shadow-batting while fielding, and strongly denied doing anything wrong.

"As for Steve Smith, I literally cannot believe some of the rubbish I've read -- absolute load of rubbish," said Langer.

"I mean, anyone who knows Steve Smith, he is a bit quirky... and we have all laughed about it for the last couple of years.

"What Steve Smith does at the crease he does it probably most games, he's just thinking about the game. Anyone who suggests for one millisecond he was trying to do something untoward, they're way out of line.

"On that wicket, that was that flat, and it was like concrete, you'd need 15-inch spikes to make an indent on the crease and he went nowhere near the crease," Langer added.

"So seriously, I thought that was absolutely ludicrous."

The fourth and final Test gets underway on Friday in Brisbane, with the series locked at 1-1.

Steven Smith Australia vs India 2020-21 Cricket
Get the latest updates on India vs Australia Series, check out the India vs Australia Schedule for 2020-21 and Ind vs Aus live score . Like us on Facebook or follow us on Twitter for more sports updates. You can also download the NDTV Cricket app for Android or iOS.