India vs Australia: Aaron Finch and Steve Smith scored centuries as Australia sailed to a 66-run win in the 1st ODI. 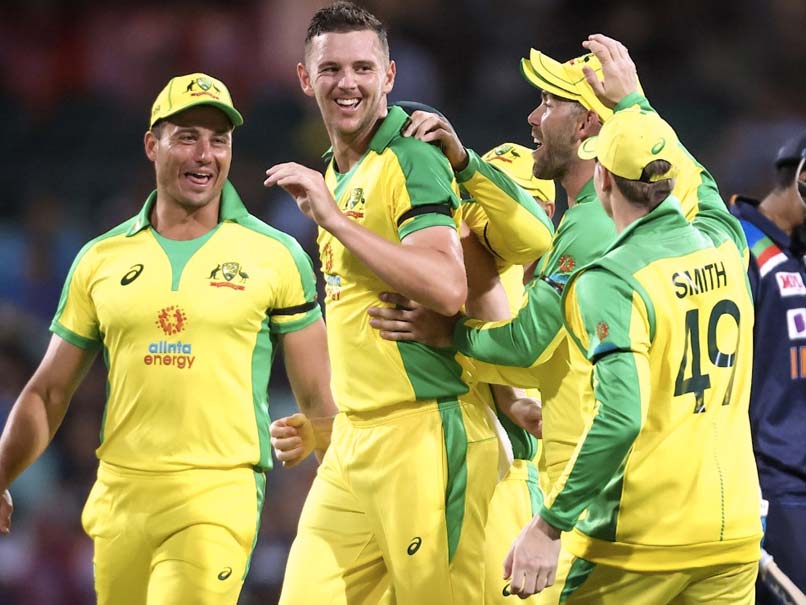 Hardik Pandya's 90 off 76 balls and Shikhar Dhawan's 74 off 86 weren't enough to help India chase down a mammoth 375 as Australia beat them by 66 runs in the first One-day International at the Sydney Cricket Ground (SCG) on Friday to take a 1-0 lead in the three-match series and get 10 points in the ICC ODI Super League. Aaron Finch (114) and Steve Smith (105) hit centuries - Smith's the third fastest ever by an Australian in ODIs - and were helped along by Glenn Maxwell's 45 off 19 and David Warner's 69 off 76 on a flat SCG wicket where all Indian bowlers struggled to contain the runs. India were restricted to 308 for 8 in 50 overs.

Coming in to bat when India were in a spot of bother at 101 for 4 in the 14th over, Pandya stitched together a crucial partnership of 128 runs with Dhawan to keep India in the chase.

Pandya brought up his fifty off just 31 balls in the 24th over of the Indian inning.

Pandya took special liking to the spinners, Adam Zampa and Glenn Maxwell, who were hit for sixes, mostly in the 'V' between long-off and long-on, as India remained on course for their highest successful chase in ODIs.

Chasing Australia's 374 for 6, India got off to a good start with openers Dhawan and Mayank Agarwal (22 off 18) adding 53 inside the first six overs before Josh Hazlewood got Agarwal dismissed off a short ball.

An uncharacteristic Virat Kohli played a lot of shots in his short stay of 21 off 21 balls, which had two fours and a six, before Hazlewood got him to hit another short ball to Finch at short mid-wicket.

Kohli was given a lifeline when Zampa dropped him at fine leg, but the Indian captain couldn't make the most of it.

When Shreyas Iyer - caught by wicket-keeper Alex Carey as Iyer tried to duck under a bumper by Hazlewood with his bat pointing upwards - and KL Rahul, caught by Smith off Zampa, were dismissed inside the first 15 overs, India faced a humongous task.

However, Pandya and Dhawan dug in and batted through the middle overs to give India a solid base to launch from in the death overs.

But Zampa had other plans as after dismissing Dhawan in the 35th over, caught by Mitchell Starc in the deep, he got the better of Pandya, who also holed out to Starc at long-on, bringing an end to his innings studded with seven fours and four sixes in the 39th over.

Earlier, Finch won the toss and opted to bat. He and opening partner Warner added 156 runs for the first wicket, thereby setting things up for the middle order.

For India, Shami was the pick of the bowlers with figures of 3 for 59 from his full quota.

Hardik Pandya Australia vs India 2020-21 Australia vs India, 1st ODI Cricket
Get the latest updates on IPL Auction 2023 and check out  IPL 2023 and Live Cricket Score. Like us on Facebook or follow us on Twitter for more sports updates. You can also download the NDTV Cricket app for Android or iOS.