Australia vs India: "Happy To Bat" Wherever The Team Management Wants Me To, Says Rohit Sharma

Australia vs India: Rohit Sharma was initially dropped from the tour due to fitness issues, but was later included in the Test squad. 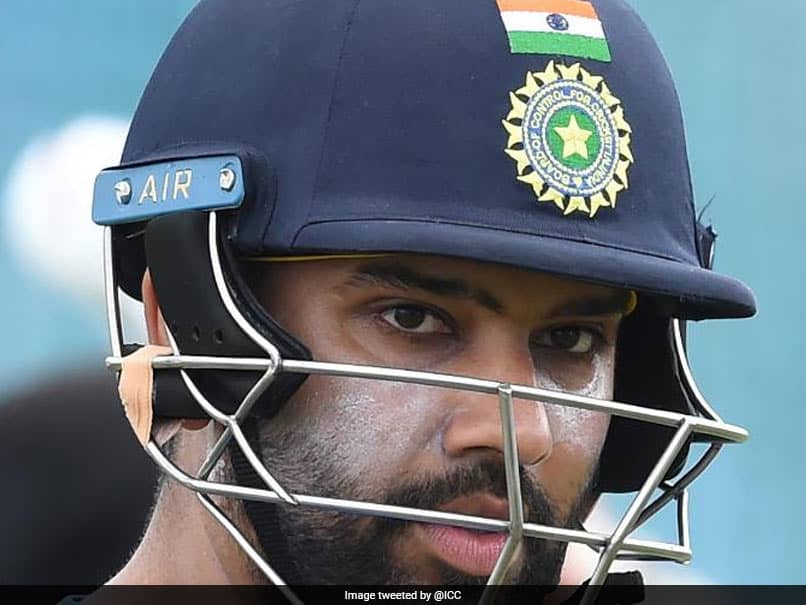 He has enjoyed and revelled in his new role as a Test opener but Rohit Sharma is ready to be flexible about his batting position in the eagerly-anticipated Test series against Australia as per the demands of the team management. The senior batsman is expected to play a big role alongside Test vice-captain Ajinkya Rahane and Cheteshwar Pujara when skipper Virat Kohli returns to India after the opening Test for the birth of his first child. "I will tell you the same thing that I have told everyone all this while. I will be happy to bat wherever the team wants me to but I don't know if they would change my role as an opener," Rohit told PTI in an exclusive interview.

He believes that the team management will have figured out his role in the batting order by the time he would reach Australia after completing the strength and conditioning work at a National Cricket Academy in Bengaluru. He had picked up a minor hamstring injury during the IPL.

"I am sure the guys already in Australia must have figured out what are options when Virat leaves and who are the guys who will open the innings," Rohit said.

"Once I reach there, I will probably have a clearer idea of what's going to happen. I will be okay to bat wherever they want," added the dashing batsman, who has a 46-plus average in 32 Tests.

One of the finest players of the hook and pull shots, the Mumbaikar believes that the bounce on Australian tracks is sometimes, not as big a factor as it is made out to be. "We talk about bounce but except for Perth, over the past few years, the other grounds (Adelaide, MCG, SCG), I don't think have that much bounce.

"Nowadays, especially while opening the batting, I will have to think about not playing the cut or pull shots and focus on playing in the 'V' and as straight as possible," he said. He spoke about how Josh Hazlewood, Pat Cummins or Mitchell Starc would keep it full with the new kookaburra.

"With new ball, whoever bowls, whether it's Starc, Cummins or Hazlewood, they will obviously pitch it up, swing the ball and the bouncer would be used sparingly.

"They would try to ensure with the new ball that they would get some movement off the air or off the pitch. With the new ball, everybody in the world loves to bowl up and send down one odd bouncer here and there.

"So majority of the deliveries will be up and towards the bat and not short," he explained. He then cited the example of how Nathan Lyon was Australia's best bowler (8 wickets) in the Perth Test that the home team won in the 2018 series.

"We talk about bounce on Australian tracks. But tell me how many people got out on bouncers during the last series? "When we played in Perth in 2018-19, it was Nathan Lyon, who got eight wickets including a five-for. In Australia, half the job is done if you can start well upfront."

For someone, who started on a brilliant note with twin hundreds as an opener, followed by a double hundred in a three-Test series against South Africa, the traditional format comes with its own set of challenges. "It's going to be challenging. In general, international cricket is never easy, whichever format it is. When you had such a long lay off (from international cricket), it becomes all the more difficult.

"So, I would be focusing on basics of red ball cricket and then you can top up with other things. That's how I would like to take it forward. You can't just jump the gun and think too far ahead," Rohit said.

Rohit said strong basics is the key to success in Test cricket. "Once you have your basics strong, you can work around that and build your own technique. Mentally, that's how you prepare," he said.

In his 13 years in international cricket, he has dealt with ups and downs and the one lesson that has stayed with him is to trust the process. "Mentally, I am prepared and I have had enough setbacks in my career where I have had long lay-offs due to injury and due to form. I know how to come back and bounce back from that.

"For me, being out for three, six or one month, really doesn't matter. What matters to me is the process," he signed off.