Australia vs India: Glenn McGrath will be raising funds and creating awareness for breast cancer during the third Test match, and has now also received support from cricket legend Sachin Tendulkar. 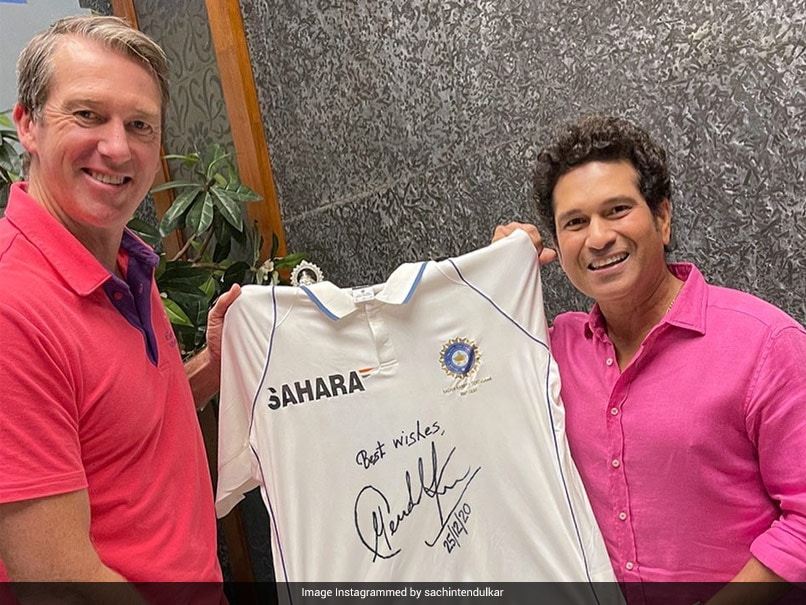 Sachin Tendulkar took to social media to pass on his wishes to Glenn McGrath's initiative to create awareness towards breast cancer in Australia during the third Test match against India. Known for their fierce rivalry during their playing days, the cricket legend posted a rather cheerful photo with the former Aussie pacer. The Master Blaster posted the photo on Instagram, and captioned it as, "Happy to lend my support to @mcgrathfoundation's noble efforts during the #PinkTest to help patients & their families dealing with breast cancer. It was wonderful meeting @glennmcgrath11 after long. My best wishes to him, his team & especially the nurses who are the backbone of this initiative. #AUSvIND".

In the photo, the duo can be seen holding an autographed vintage Indian test jersey, signed by the former Indian cricketer.

Co-founder and President of the McGrath Foundation, the former Australian cricketer launched the virtual Pink Seats campaign to help raise funds for McGrath Breast Care Nurses. It is worth noting that the Aussie legend's first wife Jane passed away in 2008 while fighting breast cancer. The deadly disease is also known to be commonly diagnosed amongst many women in Australia every year.

The virtual Pink seats campaign will be implemented in the third Test match between Australia and India, at the Sydney Cricket Ground (SCG).

Due to reduced seating capacity at the SCG, fans can buy virtual pink seats and participate in the fixture from anywhere in the country. The funds will be used for McGrath's charitable cause.

The third Test of the four-match series begins from January 7. Both teams are currently level at 1-1, with the visitors winning the second Test fixture.

Sachin Tendulkar Glenn McGrath Australia vs India, 3rd Test Cricket
Get the latest updates on ICC Women's Cricket World Cup 2022 and IPL 2022, check out the Schedule , Live Score and IPL Points Table. Like us on Facebook or follow us on Twitter for more sports updates. You can also download the NDTV Cricket app for Android or iOS.