"Rather Be Called A Dad Now": Hardik Pandya On "Rockstar Of India" Mantle

Australia vs India: Hardik Pandya, after receiving player of the match trophy in Canberra, said he is fine if Ravindra Jadeja keeps the "rockstar" mantle in the Indian team. 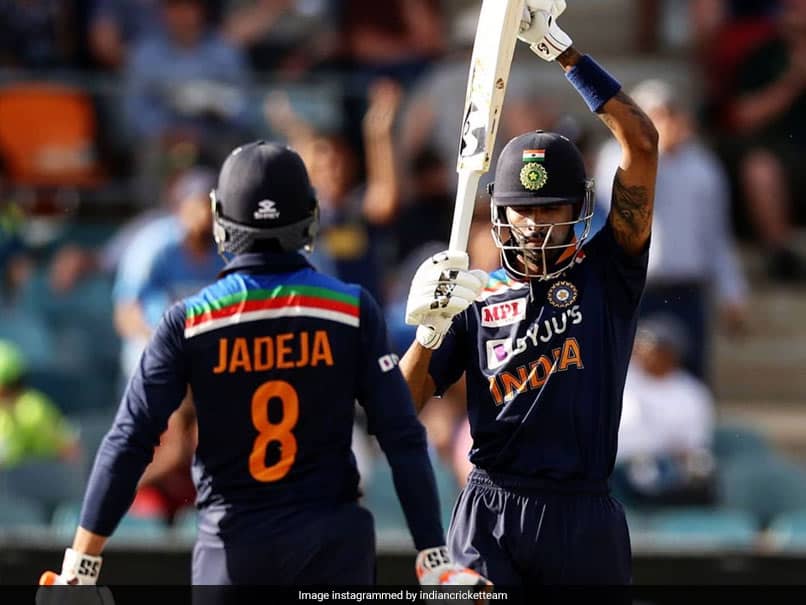 Hardik Pandya and Ravindra Jadeja put on an unbeaten 150-run stand in Canberra on Wednesday.© Instagram

Hardik Pandya, who smashed unbeaten 92 against Australia in the third One-day International (ODI), said that he is happy if Ravindra Jadeja keeps the "rockstar" of the team mantle as he has become a father now and would rather be called a dad. Speaking to former Australia spinner Shane Warne after the win in Canberra, Hardik also praised T. Natarajan, who made his ODI debut at the Manuka Oval, and termed his journey as "inspiration".

Asked if he is taking over the mantle of rockstar in the team from Ravindra Jadeja, Hardik said "I am fine if Jadeja keeps that role (rockstar of the team). I am a father now, so I would like to rather be called a dad now".

"Natarajan is quite a story, quite an inspiration with the background he's come from," Hardik added.

Hardik was adjudged player of the match for his unbeaten half-century that saw India post 302 for five from their allotted 50 overs.

Hardik along with Jadeja put on 150 runs for the sixth wicket.

In reply, Australia, having already won the series by taking home the first two ODIs, fell 13 runs short of the target.

Aaron Finch was the highest run-getter for the hosts with a knock of 75.

Shardul Thakur, playing his first match on the tour of Australia, was the pick of the bowlers as he returned with figures of three for 51 from his 10 overs.

Australia, despite losing the Canberra ODI, clinched the series 2-1. Both teams will meet again at the same venue on Friday for the first of the three Twenty20 Internationals.