Usian Bolt said his emotions were still in check at the thought of bowing out of track and field. 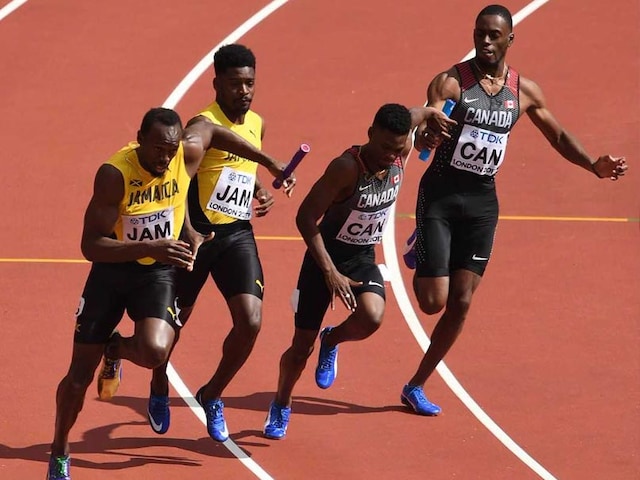 Usain Bolt's bid to bring the curtain down on his glittering career with a 15th world gold medal remained on track as Jamaica qualified for the final of the 4x100m relay. Bolt took the unusual step of racing the relay heats, something usually reserved for the more unheralded members of the squad. Tyquendo Tracey, Julian Forte and Michael Campbell safely negotiated the first three legs before Bolt steered his team home in a winning, season's best of 37.95 seconds.

"It's been brilliant. The energy in the stadium is outstanding," Bolt said, hailing the deafening support in the packed-out London Stadium "not just for me but the whole championships".

Bolt said his emotions were still in check at the thought of bowing out of track and field.

"For me it's hard to be sad because the energy I'm getting from the crowd is brilliant, I'm just happy.

"There are no words to describe how I am feeling."

Bolt acknowledged that Yohan Blake would likely come in for the final, all the while praising his less experienced relay teammates.

"The young runners in our team -- it is just about executing and coming through the race for them," he said.

It was the first time Bolt had been beaten at a major championships since the 4x100m relay at the 2007 worlds in Osaka.

Bolt has amassed eight Olympic golds and 14 world medals, 11 of which are gold, the Jamaican having won two silvers in 2007 before his 100m bronze in London.

No matter the result of the relay, organisers said Bolt will be afforded a dedicated lap of honour on Sunday in tribute to his amazing track career.

Gatlin ran the second leg for the US team, led off by Mike Rodgers, another dope cheat, BeeJay Lee and Coleman on anchor.

"It felt good," said Rodgers. "It feels like second nature because we work well together.

"We are confident we can win. We will go and prepare well for tonight."

Also qualifying for the final were France, China, Japan, Turkey and Canada.