Rohan Kamble was the only Indian athlete who progressed to the next round a day after the country's 4x400m relay mixed team claimed bronze. 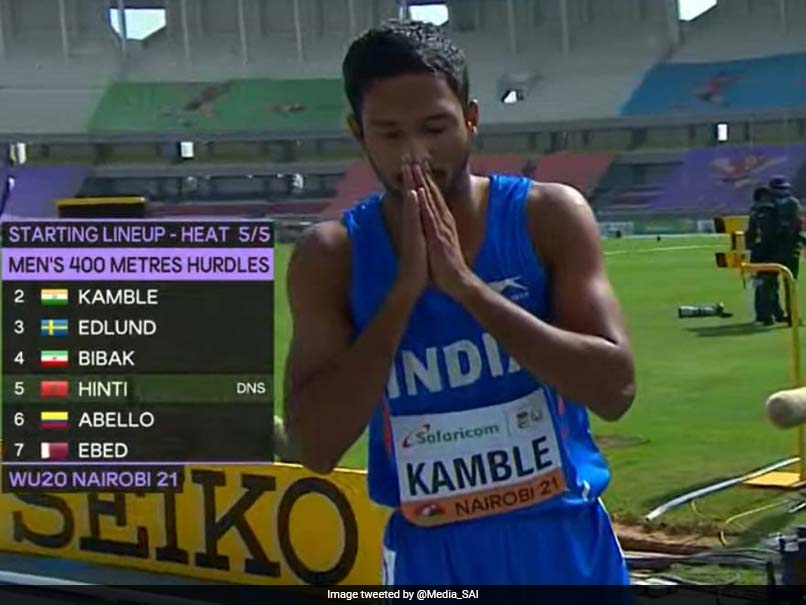 Rohan Kamble clocked 55.00 seconds to book his place in the semifinals.© Twitter

Rohan Kamble gave the Indian contingent reason to smile by making it to the men's 400m hurdles semifinals in the World Athletics U20 Championships in Nairobi on Thursday. He was the only Indian athlete who progressed to the next round a day after the country's 4x400m relay mixed team claimed bronze. On a day when the World Athletics President Lord Sebastian Coe met and encouraged the Indian team, Kamble booked a berth in the 400m hurdles semifinals by finishing fourth in the last of the five heats.

He clocked 55.00 seconds when all he needed to do was finish the race after Saad Hinti (Morocco) did not start and Amar Eded (Qatar) was disqualified for a false start.

Hardeep Kumar hit a hurdle in the opening heats and was credited with a time of 1:12.80. Earlier, India's Anu Kumar missed out on a berth in the men's 800m semi-finals.

He clocked 1:50.26 in finishing fourth in his opening round heats, just over a second slower than his personal best time, clocked in the Federation Cup Athletics Championships in Patiala on March 18 this year.

Pooja warmed up for the women's 1500m heats to be run on Friday though she did not make it to the women's 800m semifinals.

Amandeep Singh Dhaliwal, who put the shot over 17.92m on Wednesday to qualify for the men's final, fouled his first two attempts and managed a disappointing 17.08m on his third attempt to finish 12th.

On Friday, Kunwar Ajai Raj Singh Rana will need to register a personal best to get a podium finish in the men's javelin throw while Shaili Singh will seek qualification for the women's long jump final and Pooja will bid to secure a berth in the 1500m final.