Shubenkov, the two-times European champion, clocked a national record of 12.98 seconds, with American Merritt, who will leave for his surgery directly from Beijing, taking the bronze in a season's best 13.04. 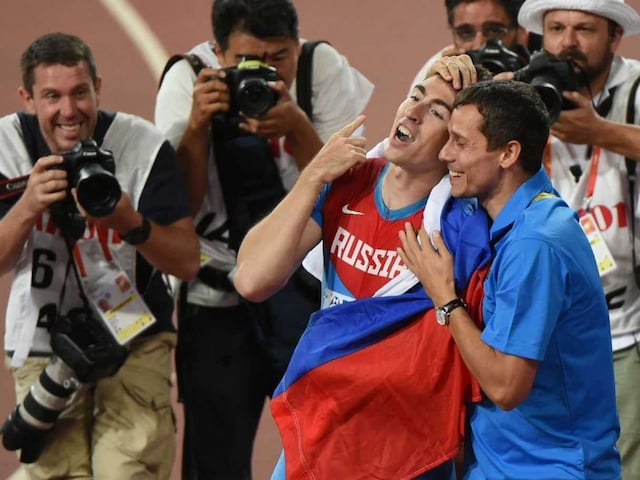 Russian Sergey Shubenkov stormed to the 110 metres hurdles world title on Friday to shatter Olympic champion Aries Merritt's hopes of an emotional gold days before he undergoes a kidney transplant.

Shubenkov, the two-times European champion, clocked a national record of 12.98 seconds, with American Merritt, who will leave for his surgery directly from Beijing, taking the bronze in a season's best 13.04.

"I can't describe what I'm feeling now," said Shubenkov after winning Russia's first world gold in the event. "I don't remember anything about the race. I heard the starting gun and then I opened my eyes and it was finished. It's not every day a hurdler from Russia wins gold."

Jamaican Hansle Parchment finished in 13.03 to pip Merritt for silver, but the American said merely reaching the podium ranked higher than winning the Olympic title.

"This bronze medal means more to me than my Olympic gold," the 30-year-old told reporters. "In 2013 when they told me I'd never run again that pretty much ended my life -- it mentally destroyed me.

"If I was a normal human being we might have seen a record, who knows? But the reality is I'm not a human. I'm under 20 percent kidney function so it's very tough. I'm just a fighter."

Merritt, who ended 2012 with an Olympic title and a world best time of 12.80 before being diagnosed with a rare kidney disease the following year, insisted he would try to try to return for next year's Rio Olympics.

"The trip home is definitely going to be a little depressing because I'm going to have surgery, not to hang out with my friends," he said. "I'm going to fight on and I'm very optimistic that I'll be able to recover and hopefully make the Olympic team.

"To persevere through everything gives me a mental toughness that I don't think my competitors have. I'm just so happy to win a medal in a season's best when it mattered most."

Shubenkov whooped and danced for joy after timing his dip at the line to perfection.

"I'm super-proud of myself," said the 24-year-old, who took bronze in Moscow two years ago. "It was a hard three days and every race was tough but our hard work all these years was not wasted."

Defending champion David Oliver trudged away from the track at Bird's Nest after only managing seventh place in a time of 13.33, but Parchment was all smiles after his silver, crediting superstar countryman Usain Bolt for inspiring the Jamaican team.

"Usain is one of the people who all the athletes look up to, to always try to achieve the best we can," said the London Olympic bronze medallist. "I can just imagine how happy my mum is feeling back home now."