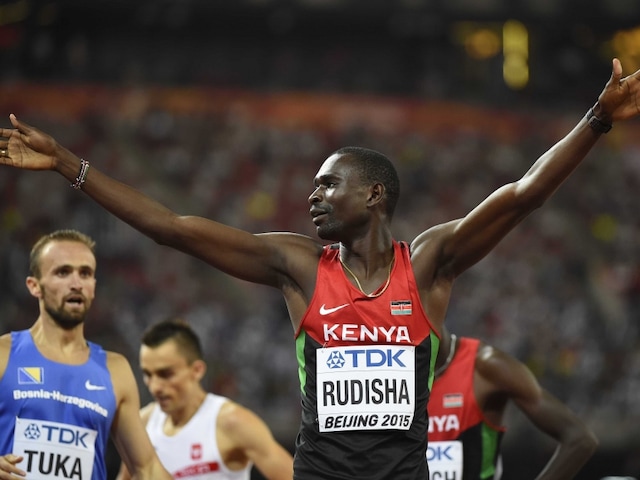 David Rudisha displayed all his tactical nous to claim a second world 800m title in Beijing on Tuesday and bury memories of a career-threatening knee injury that has wiped out two seasons.(Latest Athletics News)

He may be yet to break 1:43 this season, but Rudisha proved the perfect tactician on the night to see off all contenders and add to his triumph in Daegu in 2011, after injury forced him out of a title defence in Moscow two years ago.

"Today was more like a tactical race and that's all I wanted to do," said Rudisha, who added that a switch from endurance to speed work over the last month had paid dividends.

"I knew I had my speed and there was nothing really to worry about because I wanted to run that way, to control my speed and then sprint in the last 150 as I planned. I knew the guys didn't have my speed."

But it did not all go exactly to plan after Rudisha went out fast to nail down point, going through the first lap in 54.15sec.

Down the far straight, European champion Kszczot tried to force past Rudisha on the inside, but the Kenyan managed to muscle him off as the pack spread with runners looking for a clean line.

"As I was coming into the back straight, two guys attacked, on the inside and outside, they came across so I had to accelerate, maintain that pace and then sprint in the last 150 as I planned," said Rudisha, who set an amazing world record of 1:40.91 when winning gold in the London Games.

Tuka sat in fourth behind Kenyan Ferguson Rotich and Kszczot at 200 metres, all three fighting for two podium spots as Rudisha opened up and put in one final burst for the line.

Tuka's trademark electric 30-metre finish came too late, not even able to catch the Pole, with Rudisha clean home.

"I've been building on my speed for the last month... because in a couple of races I raced this year I've been struggling in the last 100m so when I went back I concentrated only on my speed, and my speed came back when I needed it!" the Kenyan said.

"It was so important for me to come back here and display a win after two years of disappointment and injury."

Rudisha had come to the Chinese capital on the back of three defeats, but said he knew he "was just building up".

"I had a bit of a doubt with my speed because every time I tried to train on my speed, I can feel my pain coming back from my knee so that was worrying me."

The Kenyan also acknowledged that he had relished being an underdog in the highly competitive world of the two-lap event.

"Coming here, I wasn't on the top of the world, I wasn't the favourite, I just came here as an underdog," he said.

"That worked on my side because I had little pressure coming back here so people weren't really focusing on me, they were focusing on the other guys.

"At least I sneaked in very nicely with not a lot of pressure!"