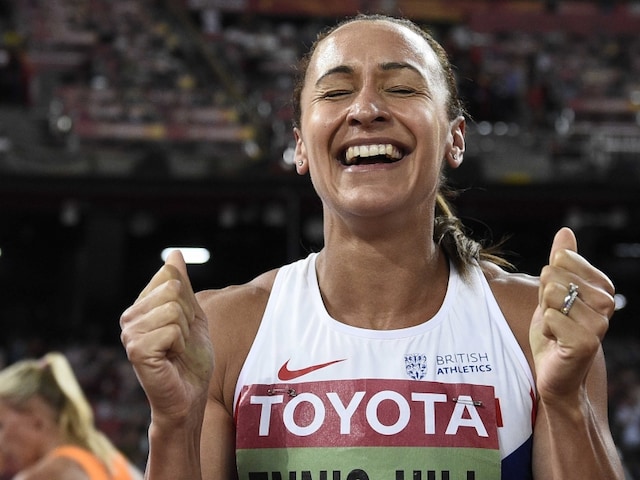 Ennis-Hill, returning to the sport after giving birth last year and battling a series of niggling injuries, was all but gift-wrapped the gold medal in Beijing after Johnson-Thompson failed to post a mark in the long jump. (Jessica Ennis Hill Returns in Grand Style)

World champion in 2009, Ennis-Hill capped a memorable two days by storming home to win the final 800 metres heat in 2min 10.13sec to finish as the runaway winner with a total of 6,669 points at the Bird's Nest stadium, a season's best.

A disconsolate Johnson-Thompson finished 28th and last on 5,039 points with eight competitors having previously dropped out.

The 22-year-old came unstuck after unwisely deciding to go for broke in the long jump, attacking the board aggressively in a bid to claw back some of Ennis-Hill's overnight advantage in the sweltering conditions.

But her high-risk strategy backfired as she fouled her first two attempts and was red-flagged again despite landing a huge third jump, leaving her devastated and prompting an official protest from British officials which was quickly withdrawn.

Ennis-Hill, who nailed a season's best long jump of 6.43m, gave her young rival a comforting hug after watching her suddenly crash out of medal contention from second overall.

A javelin throw of 42.51m then put Ennis-Hill on the brink before she wrapped up the formalities with a rousing finish, overtaking Theisen-Eaton on the back straight.