Usain Bolt clocked a world-leading 19.55 seconds to beat Justin Gatlin by nearly two-tenths to add the 200m to his 100m title. 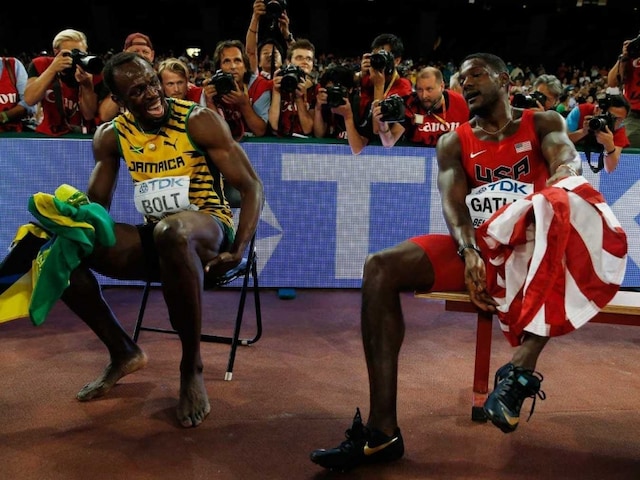 Usain Bolt has well and truly cemented his legendary status after winning his 11th individual world or Olympic sprint title from a possible 12 since he took track and field by storm at the 2008 Beijing Olympics.

The 29-year-old Jamaican shot to fame seven years ago at the Bird's Nest when he blasted to victories in the 100 and 200m before going on to anchor his 4x100m relay for a third gold.

He repeated that feat the London Olympics and has also swept all world titles in Berlin in 2009, Moscow 2013 and now in Beijing, his only blip in the Daegu 100m in 2011 after a false start.

On Thursday, Bolt clocked a world-leading 19.55 seconds to beat Justin Gatlin by nearly two-tenths to add the 200m to his 100m title. (Race report | When a cameraman brought Bolt down)

Bolt's phenomenal prowess belied a tricky season in which he sat out six weeks of competitive sprinting because of pelvic joint pain. (Also read: Bolt says he's a different man in 200m sprint)

But he insisted that the 200m was his baby and that he had been riled by pre-race comments from Gatlin, who has served two doping bans but is in the form of his life at the age of 33.

"It was never in doubt to me," Bolt said. "I was feeling better through the runs and was running myself into shape. The only worry I had was the fact I wasn't race sharp.

"I wasn't worried," he said of the 200m. "I knew I had to get through the 150 first and I ran my hardest and got it done -- after the first 150 I looked across and I could see that Justin Gatlin was tired so it was never a doubt that I was going to win the race."

Bolt savoured the moment after plunging the dagger into Gatlin for a second time.

"Why I really celebrated was that Justin Gatlin said earlier in the week that he was going to bring out something special for the 200m but I thought 'You don't talk about my 200m like that' -- so I had to prove to him that I'm number one."

Thursday's race had it all. A build-up like a boxing match, in-stadium presenters hyping up each racer in the hot, humid conditions.

The eerie, nerve-racking silence when 50,000 spectators fall quiet for the starter's orders and 'boom!' -- the crack of the starting pistol, creaking blocks pressed hard into the track as the eight sprinters burst into life.

Then the jaw-dropping sight of Bolt at full tilt around the bend and the mesmerising moment seconds later when the Jamaican hit the final straight, unfurling his 6ft 5in (1.96m) frame to burst clear of Gatlin over the last 60 metres.

One sharp look leftwards was all it took for Bolt to know he had smashed Gatlin, who has refused to speak to some media for their portrayal of his rivalry with Bolt as a battle of "good against evil" in the world of clean sport and doping.

Two arms extended, Bolt thumbed his chest, staring defiantly at the head-on television cameras as he clocked the 10th fastest-ever time, and the quickest he had run since the London Games.

It was high drama of the very best quality, a welcome break from the drugs scandals that mired track and field in the build-up to the worlds in the Chinese capital.

Track fans and officials of the doping-tainted sport can only hope Bolt will be present at the Rio Olympics next year with at least some of the same athletic ability. At his best, the showman is the biggest advert for clean athletics there ever will be.

Bolt himself then cast doubt on his participation at the next world championships in London in 2017, saying he was only 50-50 about going back to the Olympic Stadium in the British capital.

"After Rio, as I said, my sponsors want me to go one more year, but my coach said, 'Listen to me, if you're not going to be serious about going to the world championships in London,' then I shouldn't do it," he said.

"So it's all about how I feel after Rio, if I feel I can really put my body through one more season. If I'm going to be focused and I'm going to be determined. That will determine if I compete after Rio. So we'll see how it goes."