Bolt, winner of eight Olympic and 11 world gold medals, will bring down the curtain on his glittering career at August's world championships in London. 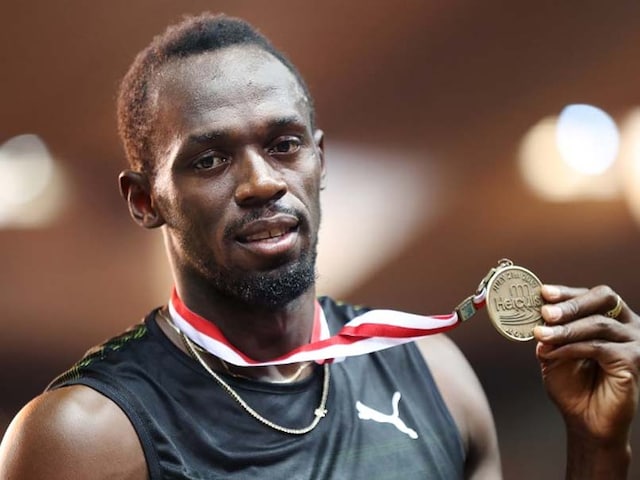 Usain Bolt targets to defend of his 100m crown at next month's world championships.© AFP

Jamaican sprinting legend Usain Bolt insists he is on the right path as he targets the defence of his 100m crown at next month's world championships in London. In his swansong season, the 30-year-old has struggled to light up the track. In his outings over the blue riband event so far this season, Bolt had clocked 10.03sec in Kingston and 10.06 in Ostrava against relatively weak opposition before finally dipping under the 10sec barrier at Friday's Diamond League meet in Monaco. A season's best of 9.95 seconds to win at a packed out 17,000-capacity Stade Louis II was just the tonic, the towering Jamaican said of his second appearance in Europe in his farewell season.

"I'm going in the right direction, although there is still a lot of work to do," he said after running a time that now moves him up to joint seventh on a 2017 world list headed by Christian Coleman of the United States with 9.82.

"Running sub-10 is always good. It was an exciting race, there was lots of energy."

As in Ostrava, Bolt suffered a sluggish start before opening up and easing through the line ahead of American Isiah Young by 0.03sec.

Bolt, winner of eight Olympic and 11 world gold medals, will bring down the curtain on his glittering career at August's world championships in London.

And he acknowledged that his final season on the track was an emotional one.

"I am always here for the fans, and of course I will miss the vibe around the track," he said.

"There are mixed emotions always - happy for my career, sad that it is ending."

When asked what his plans were after the world championships, Bolt was unwilling to disclose too many details.

"I'm planning to chill with my family after London," he said.

"And my plan after this season? I'm not sure."

Bolt said he was touched by the efforts meet organisers had gone to to make his farewell appearances special.

Monaco's Prince Albert II presented the Jamaican with a giant golden figure of Hercules after video clips of his medal-winning career were shown on the stadium's big screens following his victory.

That came after Bolt had delighted hordes of screaming fans by joining in a synchronised cheerleading dance, which ended with his trademark pose.

One of Bolt's main rivals for the 100m crown in London will likely be Canada's Andre de Grasse.

But De Grasse only raced the 4x100m relay in Monaco -- his Canadian team failing to complete the lap -- and was moved to play down ideas that Bolt had asked organisers that he not race the 100m.

"I can state that stories about me competing here in the 100m are just rumours. It was never in our plans," De Grasse insisted.