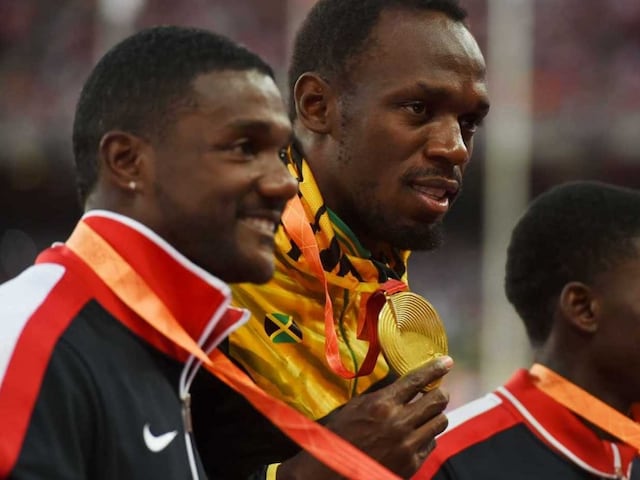 Usain Bolt and Justin Gatlin after their 100m final at the World Athletics.© AFP
Beijing:

Usain Bolt and fierce rival Justin Gatlin eased into the 200 metres semi-finals as middle distance greats David Rudisha and Genzebe Dibaba blazed to gold at the world championships on Tuesday.

Bolt, the biggest name in athletics, returned to the Beijing track two days after pipping Gatlin to retain his world 100m title, and won his 200m heat in an easy 20.28 seconds. Gatlin topped his heat in 20.19.

Sweat dripping from his beard on a humid evening, Bolt then icily shrugged off the threat of two-time doping offender Gatlin in his favourite event.

"It actually means more to me than the 100m," said the world record holder, who recovered from pelvic trouble just in time to deliver positive headlines after allegations of widespread doping engulfed the sport.

"I'm feeling tired and my legs are sore -- just from the fact it was an up and down season. Hopefully I can get my technique right and give it my best in the final," added Bolt, who returns to the Bird's Nest for Wednesday's semis with the final scheduled for Thursday.

Joining the heavyweights in the semi-finals was 16-year-old Japanese schoolboy Abdul Hakim Sani Brown, who clocked 20.35 behind Gatlin.

"It's just a dream to be here," said Sani Brown, who was ordered by his Japanese mother to choose track over football when he was in elementary school. "I don't know if I can reach the finals but I think I can go faster," added the youngster, whose father is Ghanaian. "I'll give it everything."

Long jumper Greg Rutherford won a third gold medal for Britain on day four of the competition, launching himself to a season's best of 8.41 metres to add a world title to his Olympic, European and Commonwealth crowns.

"It's unbelievable," said Rutherford. "It's just the most incredible thing. I've been dreaming of this for a long time. I can't believe I've done this."

Australian Fabrice Lapierre took silver with 8.24m as home favourite Wang Jianan claimed bronze after leaping 8.18 to bring the house down in Beijing.

Along with Rutherford's gold, Mo Farah and Jessica Ennis-Hill have also claimed world titles in Beijing, in the 10,000m and heptathlon, mirroring the trio's feats on the same fever-pitch night at the London Olympics in 2012.

Rudisha stormed to a second world title in the men's 800 metres, meanwhile, after running a typically masterful race in sapping conditions, taking Kenya to the top of the gold medal standings with four after Nicholas Bett's earlier victory in the 400m hurdles.

The Olympic champion and world record holder led from gun to tape, clocking one minute, 45.84 seconds with Poland's Adam Kszczot taking silver in 1:46.08 and Bosnian Amel Tuka the bronze in 1:46.30.

Hot favourite Dibaba oozed class as she won the women's 1,500m title with another sumptuous performance, the Ethiopian finishing strongly in 4:08.09 under the floodlights at a packed Bird's Nest stadium.

Kenya's Faith Kipyegon came home in second in 4:09.96 with Ethiopian-born Sifan Hassan third for the Netherlands in 4:09.34.

"I had a lot of confidence in this race because I told myself: you are the world record holder," said Dibaba, who last month ran 3:50.07 to shatter the world best set in 1993 by China's Qu Yunxia, a product of controversial coach Ma Junren.

"I knew all my rivals in this race and everything about them so I was very confident in the last 400 metres."

There was a first gold medal for Cuba as Denia Caballero won the women's discus, while on the track and somewhat overshadowed by the Usain Bolt show, American Allyson Felix qualified quickest for Thursday's women's 400m final in a season's best of 49.89.