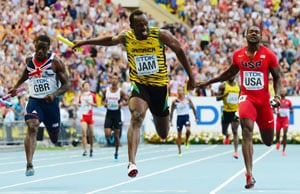 Usain Bolt equalled the record for the number of world golds won when he anchored the Jamaican 4x100m relay team to victory at the World Athletics Championships on Sunday.

It capped another remarkable week for Bolt, who first reclaimed his world 100m title in Moscow in emphatic style, clocking a season's best 9.77sec in heavy rain.

He then powered to a third successive world 200m title, destroying the field to finish in 19.66sec.

But the 26-year-old, who is also world record holder in both the 100 and 200m, has insisted that that record counted for nothing.

Instead Bolt stated after his 200m victory that his aim was to defend his Olympic sprint titles at the 2016 Rio Games, having won an unprecedented three golds (100, 200, 4x100m relay) in both the Beijing Games in 2008 and in London last year.

The relay, however, was far from plain sailing in the battle with traditional rivals the United States and Britain, who claimed silver and bronze in 37.56 and 37.80sec respectively.

Starting in lane four, Carter ran the first leg but was pegged back by British teenager Adam Gemili on his outside.

Bailey-Cole's baton passover to Ashmeade, fifth in the 100m final, went as planned and the latter did well to claw back some of the metres lost.

Then came disaster for the United States, as Rakieem Salaam fluffed his handover to anchorman Justin Gatlin, the 100m silver medallist's right foot straying five times into the Jamaican lane as he struggled to take control of the baton.

That error handed Bolt, who had a smooth handover from Ashmeade, just the space he needed to unfold his towering frame into an explosive final leg.

There was no easing up from the Jamaican sprint legend, teeth gritted, arms and legs pumping as he strove for the finish line with a savage dip.

But the time fell short of the world record of 36.84sec set at the London Olympics final by Carter, the now-retired Michael Frater, injured Yohan Blake and Bolt, the same foursome that won the world gold in the Daegu worlds in 2011.

Comments
Topics mentioned in this article
Michael Anthony Johnson Seoul Stadium USA Los Angeles Memorial Coliseum Athletics
Get the latest updates on India vs England Series, India vs England , live score and IPL 2021 Auction . Like us on Facebook or follow us on Twitter for more sports updates. You can also download the NDTV Cricket app for Android or iOS.