The athletes, who are part of Indian contingent for the Asia Pacific Deaf Games in Chinese Taipei, spent Thursday night on the pavement outside a Gurudwara as they were waiting for the visa. 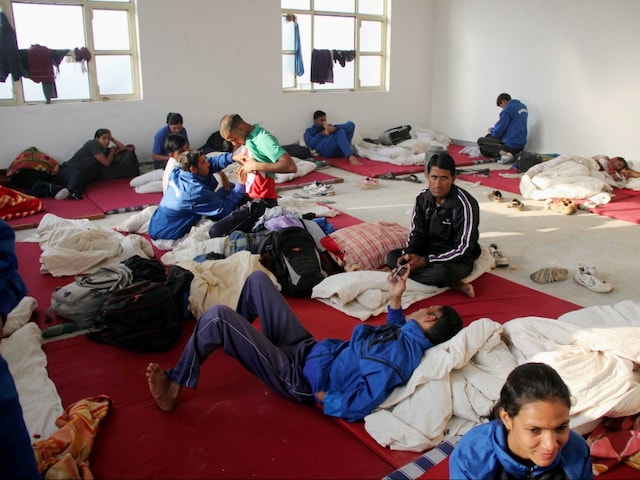 Sports minister Sarbananda Sonowal was quick to order an inquiry after the para athletes failed to get accommodation. (Picture for representational purpose only)© PTI
New Delhi:

In yet another case of apathy towards athletes, members of the Indian team for the Asia Pacific Deaf Games (APDG) were forced to sleep on pavement here on Thursday. They were waiting for visa ahead of the competition beginning in Taoyuan, Chinese Taipei on Saturday. (Read more sports stories here)

The Athletes, part of a 40-member squad, were left to fend for themselves ahead of the tournament with some of them spending Thursday night outside a Gurudwara as authorities failed to provide accommodation.

The Sports Ministry-recognised All India Sports Council of the Deaf was responsible for the differently-abled athletes but they failed at their job miserably.

The athletes, however, did manage to get the Taiwanese visa on Friday but not much can be expected from the contingent considering their frame of mind less than 24 hours ahead of the competition.

While sports minister Sarbananda Sonowal was quick to order an inquiry, its nodal agency Sports Authority of India (SAI) was also dragged into the controversy for not providing accommodation to the team members.

"I was very sad to learn about this. Whoever is responsible for this will be brought to book," Sonowal said.

SAI DG Injeti Srinivas described the incident unfortunate but categorically stated that "nobody asked us for accommodation".

"You criticise SAI whenever it is due but this case is a complete distortion of facts. Nobody asked us for accommodation. The athletes are suffering because their federation - All India Sports Council of the Deaf - is in a mess. The body has not even settled the accounts for the previous trip but despite that we made an exception and cleared Rs 50 lakh for the trip," Srinivas told PTI.

"As far as the visa issue is concerned, I have found that the athletes visa was rejected earlier because they did not provide the invitation letter of the Taiwanese Embassy.

"Thereafter, we took up the matter to ministry level and MEA got involved. The MEA informed us that visa will be given by Thursday but it was not processed due to a server problem. So they were anyway going to get the visa today, in not today then Monday. Clearly it is a case of federation not taking care of its athletes," the DG added.