Russia has been provisionally suspended by the IAAF from track and field events over accusations of "state-sponsored" doping. 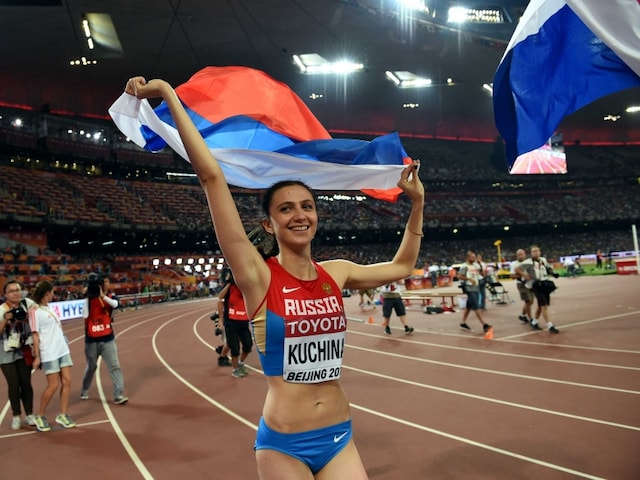 Russia have been accused of widespread doping by WADA in their report and this report was the main reason why the IAAF has provisionally suspended them from track events.© AFP

Athletics giant Russia was provisionally suspended from track and field on Friday over accusations of "state-sponsored" doping as the IAAF scrambled to salvage the sport's credibility just nine months out from the Rio Olympics. (Russia Faces Exile as IAAF Decides Doping Fate)

"Today we have been dealing with the failure of ARAF (All-Russia Athletic Federation) and made the decision to provisionally suspend them, the toughest sanction we can apply at this time," IAAF president Sebastian Coe said. (President Vladimir Putin Orders Action on Russia Doping Scandal)

"But we discussed and agreed that the whole system has failed the athletes, not just in Russia, but around the world. (Ex-IAAF Chief Resigns over Doping Corruption)

"This has been a shameful wake-up call and we are clear that cheating at any level will not be tolerated."

"I don't think they could have taken any other decision with the sword of Damocles that they had over their heads, with the pressure exerted on the commission," Mutko told the Russian TASS news agency.

But the council returned a vote of 22 for and 1 against, the simple majority confirming a suspension for Russia, who were accused of widespread doping by an independent commission set up by the World Anti-Doping Agency (WADA) in a report which has shaken track and field, one of the Olympic Games' flagship sports.

In that report, commission head Dick Pound, a former president of WADA, called for Russia to be suspended for 2016 "so that they can take the remedial work in time to make sure that Russian athletes can compete under a new framework".

The IAAF took his words to heart, saying the consequences of the provisional suspension were that "athletes and athlete support personnel from Russia may not compete in international competitions including World Athletic Series competitions and the Olympic Games".

It also means Russia "will not be entitled to host the 2016 World Race Walking Cup (Cheboksary) and 2016 World Junior Championships (Kazan)".

The IAAF added: "To regain membership to the IAAF the new federation would have to fulfil a list of criteria.

"An inspection team led by Independent Chair Rune Andersen, an independent international anti-doping expert (Norwegian), and three members of the IAAF Council, who will be appointed in the next few days."

WADA welcomed the suspension, according to spokesman Ben Nichols.

Lamine Diack, whom Coe succeeded as IAAF president in August, has also been charged with corruption by French investigators amid allegations he took bribes to cover up doping cases, principally in Russia.

Russian Sports Minister Mutko had been at pains before the council meeting to stress that Moscow was ready to reform or "create a new anti-doping organisation" were the IAAF or WADA to demand it.

Mutko, who initially ruled out any Olympic boycott in the event of a ban, also broached the idea of appointing a "foreign specialist" as head of the doping laboratory, a move towards openness never before seen in Russian sport.

"We are ready to cooperate (with the IAAF) so that our athletics is brought up to the norms demanded of us.

"But let's do this together. We're ready to do whatever it takes."

The fallout from the WADA report's damning conclusions reached as far up as Russian President Vladimir Putin, who ordered officials to launch their own internal investigation and cooperate with international anti-doping authorities.

"We must do everything in Russia to rid ourselves of this problem," said Putin, an avid sportsman and judo black belt who led Russia's bid to host last year's Winter Olympics and the 2018 football World Cup.

However, he added: "This problem does not exist only in Russia, but if our foreign colleagues have questions, we must answer them."

"The situation around the Russian athletics team is very sad. But I'd like to issue a pressing request: don't reduce all our athletes to the same level," said Isinbayeva, who has set 28 world records in women's pole vault during her career.

"It's unfair to deprive innocent athletes, who are not party to this case, the right to compete at the Olympics Games at Rio de Janeiro."

But former Namibian sprinter Frankie Fredericks, speaking on behalf of the IAAF Athletes Commission, said the commission was "angry at the damage being caused to the reputation and credibility of athletics and are united alongside our president to not shy away from the major challenges that face our sport".

"The athletes will work together to continue the process of cleaning up athletics to ensure those athletes training and competing cleanly are not tainted by the minority.

"We send a clear message to clean athletes in a dirty system to report any doping or cheating that they see or hear about. We are 100 percent in support of president Coe and believe that he is the leader that our sport needs to instigate the necessary actions swiftly and strongly."