Seema Punia is among 42 athletes shortlisted by National Anti-Doping Agency for its registered testing pool, but the agency does not have her proper whereabouts details for random out-of-competition testing 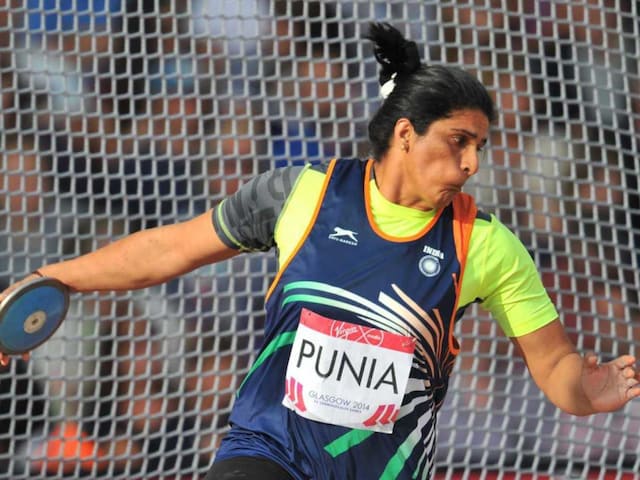 Seema Punia is among 42 athletes shortlisted by National Anti-Doping Agency for its registered testing pool.© AFP

Asian Games gold medallist discus thrower Seema Punia, who has qualified for Olympics, sprung a surprise on Friday by cancelling a media interaction on the ground that she will undergo a random dope test, amid reports that she has been shying away from the test for some time.

Seema was to address the media this afternoon but her sponsor JSW Sports informed at the last minute through an email that the event has been cancelled as she has to undergo a dope test.

"The media interaction scheduled for today (1st July 2016) with discus thrower Seema Punia has been cancelled. Seema has to undergo a random dope test as mandated by WADA and NADA and thus cannot be present for the media interaction," the email said.

But NADA officials have no clue about conducting a test on her while the Athletics Federation of India said it has no role in such dope tests these days.

"No idea about Seema undergoing a test. I have no clue as of present," a NADA source said.

With just over a month to go for the Olympics, it is not yet known whether National Anti-Doping Agency had conducted a dope test on Seema who qualified for Rio Games late last month in the United States where she trained with the funding of Target Olympic Podium (TOP) Scheme of the government.

The NADA source refused to confirm or deny if Seema underwent any dope test this year. Seema is among 42 athletes shortlisted by NADA for its registered testing pool, but the agency does not have her proper whereabouts details for random out-of-competition testing. It is learnt that Seema has turned out to be a tough not to crack as far as her dope testing is concerned and NADA has not been able to test her since January, even at the USA.

"Under the NADA registered testing pool of 42, some athletes were tested at least four-five times, while a few were not tested and they have not furnished their whereabouts details to the NADA. We have been telling to these athletes to furnish their whereabouts," an AFI source said though he refused to confirm if Seema was one of those few.

"We cannot do more than asking the athletes to furnish their whereabouts to the NADA. We cannot recommend to NADA whom to be tested or whom not. We don't do that now. It is completely the prerogative of NADA to conduct a test on a particular athlete, we have no role," he added.

Several attempts to reach Seema failed as her mobile phone was switched off. Seema, it has been learnt, has been avoiding NADA since January this year. After winning gold at the Incheon Asian Games in 2014, Seema maintained a low profile in 2015. She did not attend the national camp in 2015.

She, however, trained in Meerut (Uttar Pradesh) and then flew off to the US for advanced training and competition under the funding of TOP Scheme. She has also an unpleasant doping past as she was stripped off her gold medal in 2000 World Junior Championships in Santiago after testing positive for a banned stimulant --pseudoephedrine -- though she had claimed at that time that it was due to a medicine she took for common cold while on her way to Chile from India.

She was issued a warning but two years later, she won a bronze in the World Junior Championships in Jamaica. Later, she was embroiled in another doping controversy just before the 2006 Asian Games and she withdrew, citing "ill-health" of her father.