The testimony by Peet van Zyl, Pistorius' agent, was apparently designed by the defense as evidence of a loving relationship heading for a prosperous and glamorous future before it came to an abrupt halt in the early hours of Feb. 14, 2013. 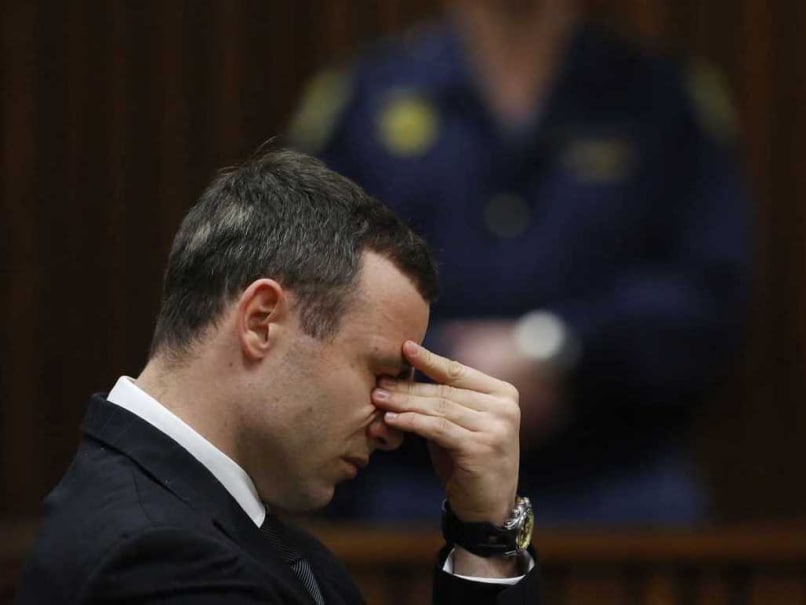 Oscar Pistorius in a court in Pretoria.© AP
London:

A close associate of Oscar Pistorius said at his murder trial Tuesday that, even on the night before the athlete killed his girlfriend, he was arranging for them to fly together - in business class - to a track meet in England as part of a glitzy series of trips abroad to show her "his world."

The testimony by Peet van Zyl, Pistorius' agent, was apparently designed by the defense as evidence of a loving relationship heading for a prosperous and glamorous future before it came to an abrupt halt in the early hours of Feb. 14, 2013.

On that day, Pistorius has admitted killing his girlfriend, Reeva Steenkamp, 29, opening fire with a handgun through a locked bathroom door. But he denies the prosecution charge that he murdered her in a jealous rage, saying he killed her by accident in the belief that an intruder had entered his home.

The latest testimony came on the 35th day of the often-delayed trial, which opened in early March and was suspended in mid-May to allow for a six-week psychiatric assessment of the track star, a double amputee since infancy. It resumed Monday after a panel of mental health experts declared that Pistorius was fit to stand trial.

Van Zyl said he had known Pistorius since 2004, acting as his agent and manager as he became a "global icon, a sporting icon" after the London Olympics and Paralympics in 2012, when Pistorius competed, without winning, against able-bodied athletes in the Olympics and collected medals in the Paralympics.

The athlete runs on scythelike prosthetic blades, which has given him his nickname "Blade Runner." Before he was allowed to compete in the Olympics, there had been some debate whether the blades gave him an unfair advantage.

After Pistorius met Steenkamp, a law graduate and model, the athlete wanted her to accompany him to athletic events - the first time he had taken a girlfriend to a track meet, van Zyl said.

On the night of Feb. 13, 2014, hours before Steenkamp died, van Zyl said Pistorius had been seeking a business class airline ticket for her to accompany him to a track meet in Manchester, England, later that year. He had also arranged for her to travel with him to an event in Brazil and to a concert in Italy by the Italian tenor, Andrea Bocelli.

"For me I would describe it as a loving and caring relationship," van Zyl said of Pistorius and Steenkamp, adding: "He said he wanted her to see his world, why he was the way he was." The agent produced an email timed at 7:29 pm on Feb.13, 2013 - hours before the shooting - searching for a ticket for Steenkamp to fly to Manchester.

Gerrie Nel, the lead prosecutor whose pugnacious cross-examination techniques have earned him the nickname "the Pitbull," said he had not been aware until Tuesday that van Zyl would be called as a witness.

But he sought to deflate van Zyl's testimony by repeatedly asking him about a reported incident at the London Olympics when an unidentified athlete who was sharing accommodation with Pistorius demanded to be moved to a different room because Pistorius was constantly arguing on the telephone.

Van Zyl seemed to hesitate with his answer. "Why don't you answer the question?" Nel said. "Is it so difficult to say something negative" about Pistorius?

Nel also asked the agent about previous testimony concerning what the prosecutor termed a "love for guns."

Van Zyl said he saw Pistorius carrying a gun for the first time in November, 2012. "He said he was fearing for his own safety," van Zyl said.

The trial was adjourned until Wednesday. For much of its proceedings the trial has been broadcast live on television, but some witnesses - including van Zyl - have said they do not wish to appear on television, restricting coverage to audio.

During his testimony, van Zyl said he had only known Pistorius to lose his temper twice, both on occasions when journalists asked him whether he would be cheating by competing with able-bodied runners because of the power of his blades.

But Nel raised another well-known episode when Pistorius complained bitterly about the blades used by Alan Oliveira, a double amputee from Brazil who beat him in the Paralympics 200-meter race, accusing him of using blades that were unfairly long, allowing him to take fewer and longer strides. But van Zyl said he had not been in London at the time.