Mo Farah, who is also current Olympic and world 10,000m champion, clocked a meeting record of 13min 11.77sec at the Lausanne Diamond League in his first outing since doping allegations against his coach Alberto Salazar. 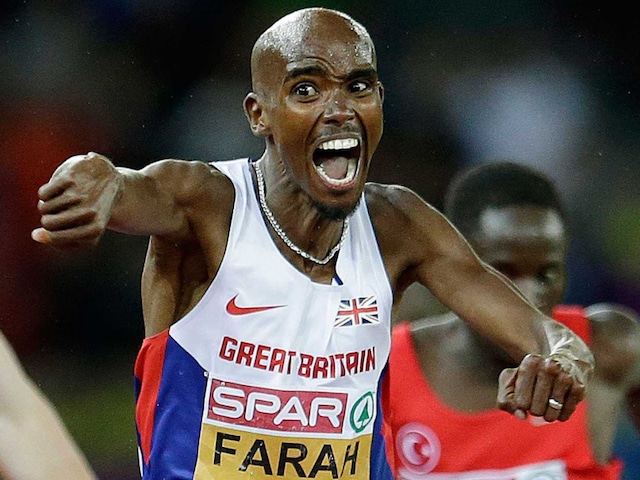 This victory is also a way to answer some of the critics regarding my coach: Farah
Lausanne:

Reigning Olympic and double world champion Mo Farah dominated the 5000m at the Lausanne Diamond League on Thursday in his first outing since doping allegations against his coach Alberto Salazar.

Farah kicked back on the final lap from 80 metres out to beat a high-quality field featuring five of the top six in the world rankings this year, and said afterwards that the victory was a good response to his and Salazar's critics.

"This is what I work for, the crowd were great," beamed Farah after his first outing over 5,000m this season and his first race in six weeks after he pulled out of the Birmingham Diamond League meet in early June to return to his US training base to confront Salazar over doping allegations.

"I had a great finish. Overall I am happy with the way the race went today. This victory is also a way to answer some of the critics regarding my coach that came out lately."

The documentary alleged that Salazar violated doping rules by administering testosterone to American distance runner Galen Rupp in 2002 when Rupp -- a training partner of Farah -- was only 16, and encouraging misuse of prescription drugs.

Farah was not implicated for any wrongdoing, insists he is "100 percent clean" and has welcomed subsequent probes by both the British and US anti-doping agencies to help clear his name.

On the track, Kenyan Ismael Kombich set off at a cracking pace, Farah settling in the following pack which had quickly stretched.

A second Kenyan hare, Geoffrey Barusei, took over with eight-and-a-half laps to go, carrying on the unrelenting rhythm before a vocal crowd at Lausanne's Stade de la Pontaise in balmy conditions.

Farah took the lead with three laps to go, looking very comfortable as a peloton of six broke clear.

The Somali-born Briton hugged the inside line as the bell sounded, but Kejelcha broke with 300m to go. But it was not to last.

Farah kicked back and purred past Kejelcha from 80 metres out, waving exultantly at the crowd in what was an emotional finish, before doing his trademark 'Mobot'.

Farah will now head to Monaco where he will race 1500m, having famously set a new European record over the distance in his last outing in the Principality in 2013, just before the Moscow worlds when he struck double 5000/10,000m gold.