Justin Gatlin, in the absence of Jamaican star Usain Bolt, won the 100m in 9.98sec at the season-ending Diamond League meet in Brussels, but sustained a thigh strain that saw him withdraw from the 200m as a precaution. 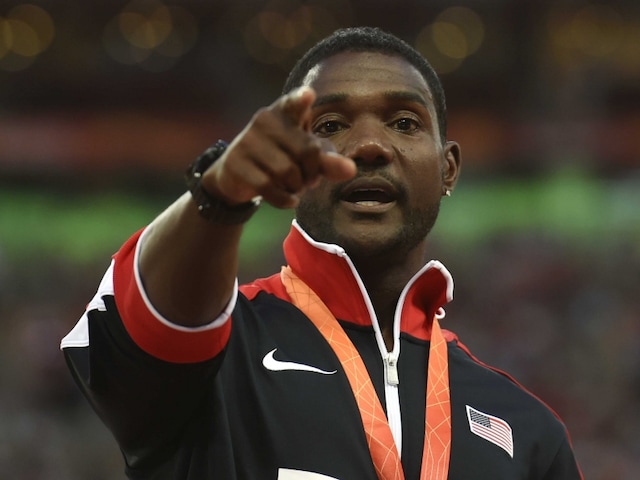 Justin Gatlin has warned that he will be "hungry" when the Rio Olympics roll around in 2016 after bringing to an end a "successful yet bittersweet" year in which he won double world sprint silvers.

Gatlin, in the absence of Jamaican star Usain Bolt, won the 100m in 9.98sec at Friday's season-ending Diamond League meet in Brussels, but sustained a thigh strain that saw him withdraw from the 200m as a precaution.

The controversial American, who has served two doping bans, said his experience at last month's world championships in Beijing had been "bittersweet", as Bolt beat him into silver in both the 100 and 200m.

"I've been leading from the start of the season so for me to come out here and do something is successful within itself.

"To be able to come away from a world championships and win medals where there were some athletes who are great athletes who didn't even get to the finals or make the podium in Beijing, so to come away with two silvers, I'm happy with that.

Looking back at his Beijing experience, Gatlin said: "It's bittersweet. Obviously I wanted to go out there and win and run a very fast time.

"In track and field, sometimes you run fast and sometimes you surprise yourself and the audience when you do run fast, that's for any track athlete.

"To be able to come away with two silver medals is still very, very good."

Gatlin, who will be 34 when the Rio Games come around, said the build-up to the Olympics would be different to his normal season when he likes to start running very early.

"Next year's going to be a different look so I think a lot of people are not going to see me as early, but when I do show up I'm going to show up."

Gatlin said that he would again be seeking "consistency", as he had done this season.

"The goal is bettering myself from last year," he explained. "In 2014 I was running a lot of 9.8sec, this year I ran a lot of 9.7s, I just pushed the envelope a little more, in China, to better myself.

"It wasn't a perfect season when it came to the last 30 metres of my race even with the faster times, and those are things I can work on in 2016 and hopefully get some faster times."

Gatlin rebounded from a first doping ban to claim 100m gold at the 2004 Athens Olympics and the sprint double at the 2005 worlds in Helsinki before then serving a second doping ban between 2006-10.

He returned from that latter suspension to nail the 2012 world 60m indoor title, Olympic bronze at the London Games and a world silver in Moscow a year later.

But Gatlin insisted he had paid no attention to what he dubbed a skewed build-up to his on-track battle with Bolt, who has never tested positive, often portrayed as one of "good against evil".

"I didn't focus on that when I got to Beijing, I didn't worry about the articles, read anything, I just focused on running, that's what I do," he said.