In a letter to the sports ministry, the IPC "appreciated" the government's suggestion to set up an ad-hoc committee to run paralympic affairs in the country and sought the details of persons who can be part of such a panel. 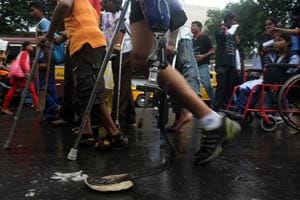 In a big boost to India's para-athletes, the International Paralympic Committee on Tuesday gave them permission to compete at international competitions under the IPC flag in spite of the ban slapped on the national body.

In a letter to the sports ministry, the IPC "appreciated" the government's suggestion to set up an ad-hoc committee to run paralympic affairs in the country and sought the details of persons who can be part of such a panel.

Immediately after the IPC suspended Paralympic Committee of India on April 17 due to internal bickering, the sports ministry had followed suit to de-recognise the PCI for the shabby treatment of para-athletes during the National Para-Athletics Championships in Ghaziabad in March.

Subsequently, the ministry had written a letter to the IPC, proposing to set up an ad-hoc committee to run paralympic affairs in the country and to arrange for a mechanism for Indian para-athletes to take part in international events with Sports Authority of India sending entries of such athletes.

"In order not to penalise Indian athletes, we have decided to enable athletes who are already licensed in our SDMS (Sport Data Management System) to participate in competitions. Please note that these athletes will not represent their country but will be competing under the IPC flag for the moment," IPC Chief Executive Officer Xavier Gonzalez said in the letter to the sports ministry.

"We take good note that the Government of India has also suspended PCI. We do appreciate your concern about the athletes, and would like to assure you that we also have their best interest in mind and we will make sure they are not too affected by this sanction," the letter said.

"Each year, every national body will have to enter names of para-athletes to the SDMS for IPC to grant license. We already have around 300 Indian para-athletes who have already got license in view of the now postponed Indian Open Para Games (which was to be held early this month)," PCI Secretary General J Chandrashekar told PTI.