The accusations against Lamine Diack comes at a critical time for the IAAF as the World Anti-Doping Agency will release a report on allegations of widespread use of banned substances in Russia and other countries. 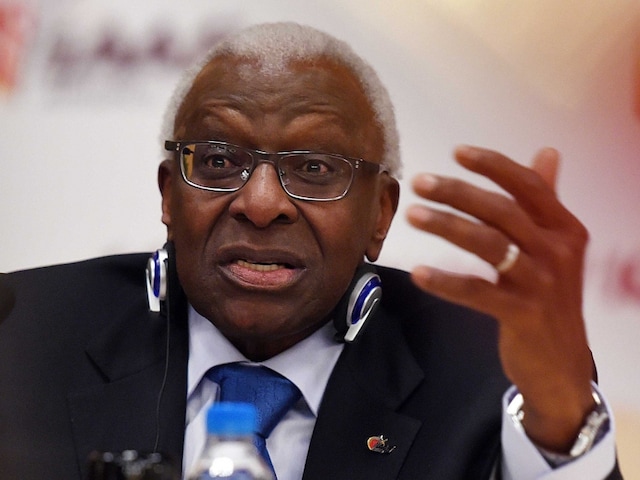 Lamine Diack is being accused of taking bribes to cover up doping cases in Russia and other countries.© AFP

Police raided the International Association of Athletics Federations (IAAF) headquarters in Monaco before charging the 82-year-old Diack, who stood down in August when Britain's Sebastian Coe was elected to head the scandal-tainted federation. (WADA, IOC Worried as IAAF defends its Anti-Doping Record)

Coe asked to be questioned by investigators over the case during the raid on Tuesday, IAAF spokesman Chris Turner told AFP. (Sebastian Coe Looks to Curb doping After winning IAAF Presidency)

The sensational charges were laid ahead of the release this month of a report by a World Anti-Doping Agency (WADA) commission into allegations of widespread substance abuse in Russia, Kenya and among world champions.

The 82-year-old Senegalese official and his legal advisor, Habib Cisse, were charged with corruption, money laundering and conspiracy, French prosecutors said in a statement.

Both were released on bail. A former IAAF anti-doping doctor, Gabriel Dolle, was detained for questioning, they added.

"Emanating from separate ongoing investigations by WADA's independent commission and the IAAF's own independent ethics commission into allegations surrounding its anti-doping rules and regulations, a French police investigation has now commenced," said an IAAF statement.

"The IAAF is fully cooperating with all investigations as it has been from the beginning of the process."

The statement added that "police visited the IAAF HQ offices yesterday to carry out interviews and to access documentation."

A source close to the investigation told AFP that the case was focusing on two or three doping tests by Russian athletes.

But the inquiry could be spread to other cases involving other nationalities, the source added.

Diack was the IAAF president from 1999 until this year, a period when international athletics was hit with repeated doping scandals.

His son, Pape Massata Diack, was forced to resign last December as an IAAF marketing executive over accusations that he organised doping cover-ups for Russian athletes.

The accusations come at a critical time for the IAAF as the World Anti-Doping Agency will this month release a report on allegations of widespread use of banned substances in Russia and other countries.

WADA has spent this year investigating allegations by the Sunday Times newspaper and German ARD broadcaster of widespread doping by Russian and Kenyan athletes.

This was extended in August to look into allegations that the IAAF had failed to follow up suspicious tests by hundreds of athletes including world champions and Olympic medal winners.

"We expect the independent commission to deliver the findings of its report this month," WADA spokesman Ben Nichols told AFP.

The WADA board is to hold a meeting in mid-November.

About 50 Russian athletes are currently banned by the IAAF, the highest number of any country, and Coe addressed Russian coaches during his two-day visit to Russia this week to meet Sports Minister Vitaly Mutko and Olympic leaders, an IAAF statement said.

"I expressed my uncompromising position on the issue of doping in athletics and the importance for the sport to build trust and defend clean athletes at all times," Coe said.

But he added: "I was able to meet and interact directly with Russian athletes, coaches and officials, and I appreciated their openness, passion for our sport and noted a real appetite for change."

Russian sports leaders have denied they have higher levels of doping than in other countries.