Defence witness Annette Vergeer said Oscar Pistorius would be vulnerable to gang rape if sent to one of South Africa's brutal prisons. 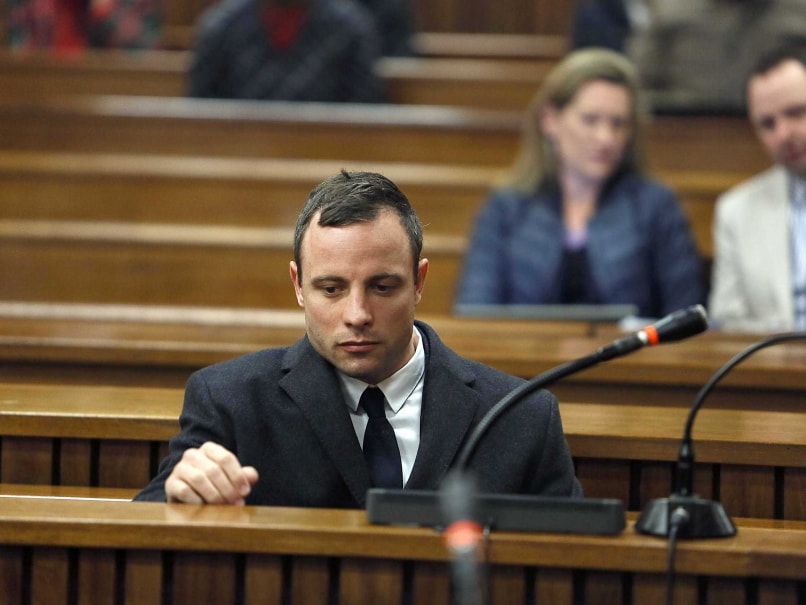 Pistorius has been found guilty of unlawfully killing the 29-year-old model but acquitted of the more serious charge of murder.© AFP
Johannesburg:

Double amputee Oscar Pistorius would be vulnerable to gang rape if sent to one of South Africa's brutal prisons, a defence witness claimed during a day of heated courtroom argument on Tuesday.

With sentencing days away, the state and defence traded angry barbs over the Paralympian star athlete's disability, charity work and "blood money" apparently paid to Reeva Steenkamp's family since her death.

Pistorius has been found guilty of unlawfully killing the 29-year-old model but acquitted of the more serious charge of murder.

A state source told AFP that Judge Thokozile Masipa could rule on his punishment on Friday, with her options ranging from a fine to 15 years in prison.

Defence witness Annette Vergeer warned a jail stretch would "break" Pistorius and claimed it was not in the interest of justice. (Also Read: Pistorius Spoke to Ex-Girlfriend Before Killing Reeva)

"Without legs he will be vulnerable and a lot more vulnerable than the normal man," said Vergeer, a parole office who was paid for her work for the defence.

"I've recently done a case for rape within the prison, gang rape. How can we say that he won't be exposed to that?" she said, adding that washing his stumps may also be a problem.

South Africa's department of correctional services has said that Pistorius could be entitled to separate accommodation "depending on the vulnerability caused by the disability".

There is little doubt that the prison system in South Africa is in a bad state, with violence, overcrowding and criminal behaviour all endemic.

Since the hearing began on Monday the tone in court has become increasing terse.

The defence on Monday suggested Pistorius clean a museum for 16 hours a week as punishment for killing Steenkamp, drawing a furious reaction from the state.

On Tuesday, lawyers traded accusations and counter-accusations about money changing hands between Pistorius and Steenkamp's parents after Reeva's death.

A lawyer for the Steenkamps revealed they had received $540 (430 euros) a month from Pistorius, but now wanted to pay it back.

Prosecutor Nel claimed that the Olympian also offered the dead model's family a one off "blood money" payment of nearly $35,000, which the family rejected.

"Did the legal team of the accused tell you that the deceased family rejected the offer of 375,000 (rand)?" Nel asked state witness Vergeer.

"The deceased's mother went so far to say that she rejects that and that she doesn't want blood money," he added.

Claims about Pistorius vulnerability and remorse could be central in deciding what punishment he faces. (Pistorius Free to Compete: South African Olympic Body)

Earlier on Tuesday, prosecutors poured scorn the defence's portrayal of "Blade Runner" Oscar Pistorius as a caring and charitable athlete.

Nel told the sentencing hearing that Pistorius's charity work was nothing unusual for a superstar athlete, arguing he was primarily motivated by personal fame and fulfilling his contractual duties with major sponsors, including Oakley and Nike.

"It is merely an advancement of your career to become involved," Nel said in a scathing cross-examination of Pistorius's longtime manager, Peet van Zyl.

"I think a lot of sportsman want to make a difference and contribute," replied Van Zyl.

Pistorius admitted he killed Steenkamp by firing four hollow point bullets through a locked toilet door in his upmarket Pretoria home on Valentine's Day 2013, but said he believed he had been shooting at a burglar.

He is currently out on bail of one million rand ($90,000, 71,000 euros), but has withdrawn from competitive sport since his arrest.

He also had to sell his house inside a gated compound in Pretoria, the scene of the crime, to fund the cost of his defence.

The state has indicated it will call at least two witnesses, whose testimony is expected to wrap up on Wednesday or Thursday.

Both the state and defence have 14 days to appeal Masipa's decision.

The trial, which began on March 3, was broadcast live on television and radio, feeding intense local and international media interest.