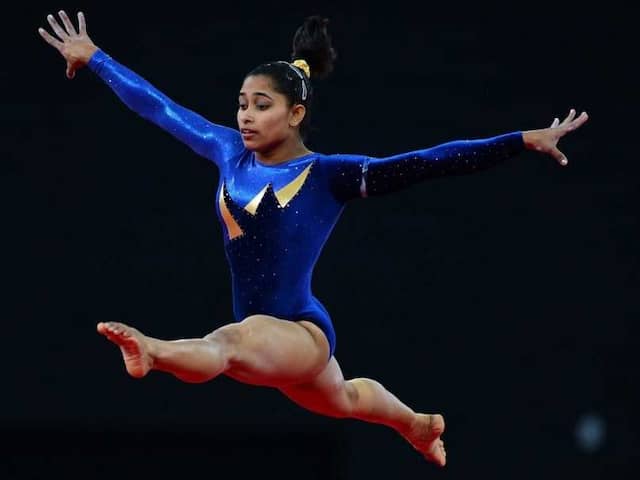 Dipa showed no signs of wear and tear during the Gymnastics World Challenge Cup.© AFP

Under no illusions about the enormity of his task at the Asian Games as coach to Indian gymnastics' golden girl Dipa Karmakar, Bishweshwar Nandi said the "first target" will be to make the finals of the vault event in artistic gymnastics, the recent high notwithstanding. "I don''t want her to think of a medal from the outset. She is coming back after an injury and it won''t be easy. I want her to reach the finals. That is the first target," Nandi told IANS. Returning to action after a long lay-off of nearly two years due to injury, Dipa clinched the gold medal in the vault event of FIG Artistic Gymnastics World Challenge Cup at Mersin, Turkey, last month.

The 24-year old from Tripura showed no signs of wear and tear by scoring 14.150 to win gold after topping the qualification round with a score of 13.400.

"I know that expectations have been heightened after her comeback gold in the Artistic Gymnastics World Challenge Cup. There will be extra pressure and you cannot avoid it.

"Pressure is on me as her coach, on her and the audience too. Everyone expects Dipa to win a medal whenever she is in action," said Nandi, who saw his student miss a medal by a whisker and finish fourth in the vault event at the 2016 Rio Olympics.

Recuperating from an Anetrior Cruciate Ligament (ACL) injury she picked up after the Olympics, a surgery kept Dipa out of the Commonwealth Games.

Rating the Asian Games as the "second Olympics", Nandi said he is leaving no stone unturned in preparing Dipa.

The 18th Asian Games are scheduled to be held from August 18 to September 2 in the Indonesian cities of Jakarta and Palembang.

"Asian Games is like second Olympics. Simply because there are players from China, Japan, South Korea, North Korea and Uzbekistan.

"For us in Indian gymnastics, these countries have some of the best players and the competition is very tough.

"Therefore whatever we are teaching Dipa, all is aimed at her putting the best foot forward at the Games. We are leaving no stone unturned," said Nandi, a Dronacharya awardee.

At the World Challenge Cup, Dipa chose to do a Handspring 360 and Tsukuhara 720 with difficulty ratings of 5.4 and 5.6, almost a point less than Produnova (6.4) under the new point system.

It is the Produnova that had catapulted Dipa into collective consciousness two years back, being among the five women in the history to have successfully performed the "Vault of Death".

Nandi admitted that dropping Produnova from Dipa''s arsenal was a hard call but keeping her injury in mind, they could not afford the risk.

"We could not take the risk because it''s not been long since she recovered. She only started practicing at full tilt after the CWG."

Nandi conceded that there could be others better prepared than Dipa, and whatever the outcome it would always be a learning curve.

"We are not thinking about what will happen in Indonesia. There could be others who are better equipped than her. If she does well, nothing like it. If others have a better day, we will bring back the experience from the competition," he said.