MR Poovamma, one of the 17 athletes recommended for Arjuna Awards, had won a bronze in women's 400m at the Incheon Asian Games last year and was also a part of gold-winning 4x400m relay team. 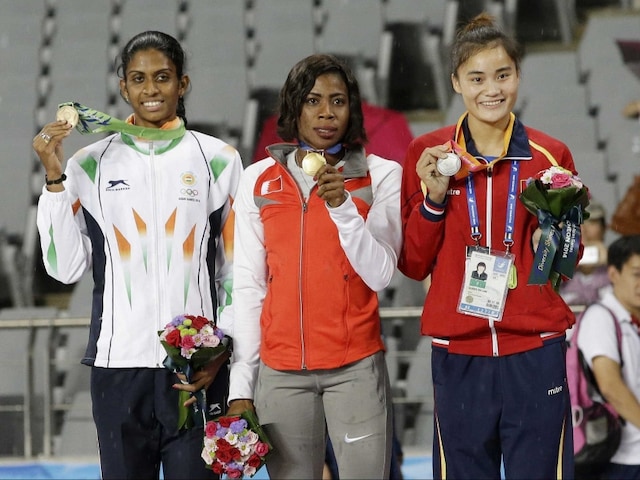 File photo of Machettira Raju Poovamma (L) on the podium at the Asian Games in Incheon.© AP
New Delhi:

Expressing happiness at the recommendation for the coveted Arjuna Award, ace quarter-miler M R Poovamma on Tuesday described it as a "dream come true". (Click here for latest Athletics stories)

"I am not being able to describe how happy I am right now. Every athlete wants to get awards and recognition from the government. It is a dream come true for me. It is my best moment in life," Poovamma told PTI from NIS Patiala, where she is currently undergoing training.

25-year-old Poovamma, one of the 17 athletes recommended for Arjuna Awards on Tuesday by a selection panel appointed by the Sports Ministry, won a bronze in the individual women's 400m race and a gold in the 4x400m relay race in the Incheon Asian Games last year.

Poovamma, born at a small town in Kodagu district of Karnataka, also clinched a silver in 400m race in the Asian Championships at Wuhan, China in June.

"This was my first nomination by Athletics Federation of India and I am going to get the coveted award in my first attempt. This is my first award from the government in recognition of my achievements," she said.

"I was expecting I could get the award and it came true. Now, I can proudly say that I am an Arjuna Awardee. This is a big achievement," she added.

She said the honour will push her to do better and put more responsibility on her shoulders.

"I know winning the award means I now have more responsibility than before to do better and I would gladly accept it. My short term target for now is to qualify for 2016 Rio Olympic Games," said the lanky runner.

"I am now training hard at the NIS and leaving for the World Championships (August 22-30) in Beijing after a few days (as part of Indian women's 4x400m relay race)," Poovamma, who trains under Kunhi Mohammed at NIS Patiala, said.