Vikas Krishan suffered a nasty cut just above his left eye after an accidental clash of heads during his quarterfinal bout against China's Erbieke Tanglatihan. 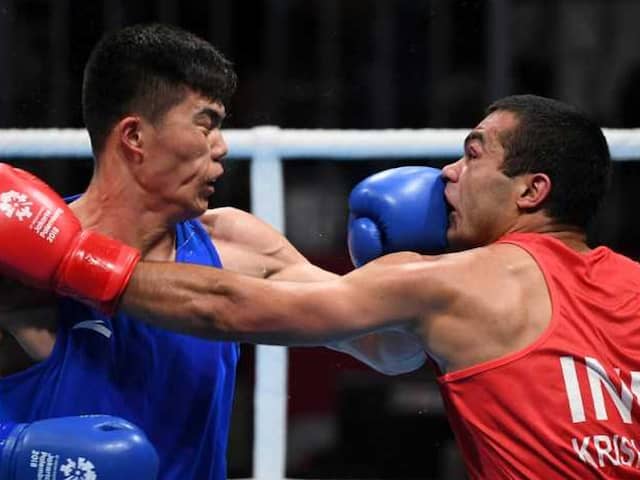 Vikas Krishan was declared medically unfit to fight his semifinal bout due to a cut on his left eyelid.© AFP

Injured Vikas Krishan has pulled out of his Asian Games 2018 boxing semifinal on Friday, a source within the team told AFP, denying him the chance of repeating his 2010 gold-winning performance. India's leading middleweight boxer suffered a nasty cut just above his left eye after an accidental clash of heads in the first round of his quarterfinal bout against China's Erbieke Tanglatihan on Wednesday. The 26-year-old was to take on Kazakhstan's Amankul Abilkhan in his last-four clash on Friday evening but has been forced out due to the injury.

During his quarterfinal bout, Vikas Krishan went on to win a split decision after being forced to box at distance to protect the wound but his withdrawal means he will have to take home the bronze medal.

His eye was swelling badly by the end of the contest and almost completely shut when asked by AFP if there was enough time to get it fixed before Friday's semifinal.

"I really hope so," said Vikas, before disappearing for treatment.

But time has run out with the source adding that the boxing team's doctor had pronounced him unfit to fight against Abilkhan Amankul of Kazakhstan, who will receive a walkover to Saturday's final.

There, the big-punching Kazakh will meet either Eumir Felix Marcial of the Philippines or Israil Madrimov of Uzbekistan.

Vikas's quarterfinal win meant he became the first Indian to win three Asian Games boxing medals, and will add the 2018 bronze to his Asian Games kitty. He won a lightweight 60kg category gold in Guangzhou 2010, before winning a middleweight bronze in the 2014 edition in Incheon.

Comments
Topics mentioned in this article
Boxing Asian Games 2018
Get the latest Cricket news, check out the India cricket schedule, Cricket live score . Like us on Facebook or follow us on Twitter for more sports updates. You can also download the NDTV Cricket app for Android or iOS.