The 23-year-old threw the iron ball to 20.75m to win the gold and set a national record as well. 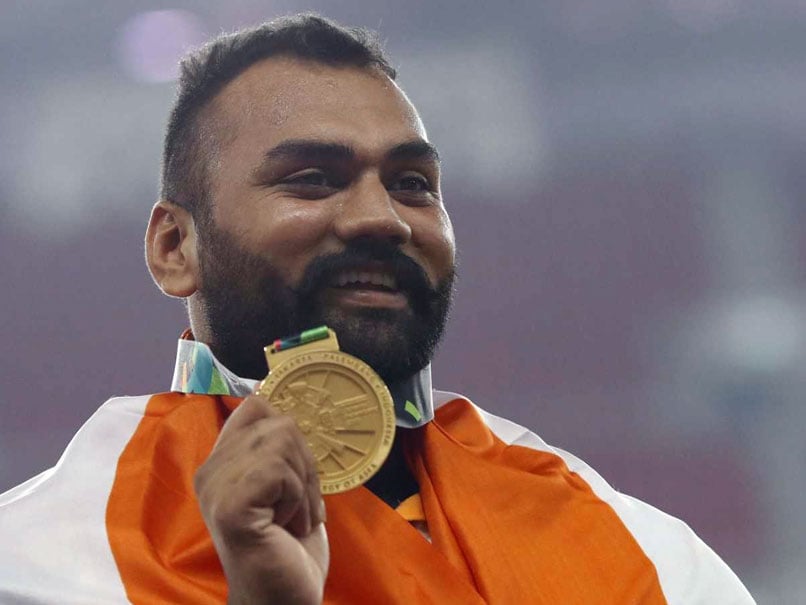 Toor lived up to the billing of being the strongest contender.© AFP

Tajinderpal Singh Toor clinched the men's shot put gold with a record-shattering throw to open India's medal account in athletics in the Asian Games on Saturday. The 23-year-old threw the iron ball to 20.75m to win the gold and set a national record as well. He bettered the six-year-old record of 20.69m in the name of Om Prakash Karhana. Toor's effort was also an Asian Games record. Toor lived up to the billing of being the strongest contender as he was the season leader among the Asian athletes in this event. His earlier personal best was 20.24m which he came up with last year.

The Punjab shot-putter cleared 19.96m in his first and fourth attempts before coming up with a huge throw of 20.75m in his fifth and penultimate throw. China's Liu Yang took the silver with a best throw of 19.52m while Ivan Ivanov of Kazakhstan won the bronze with 19.40m.

This is the eighth gold medal for India in men's shot put in the history of the Asian Games.

Toor, who left behind an ailing father who is battling cancer, said all his sacrifices have paid today.

Another national record fell by the wayside as rising star Hima Das clocked 51.00 seconds to qualify for the women's 400m final.

She obliterated the 14-year-old national record set by Manjit Kaur (51.05) in Chennai in 2004.    Hima finished second in her heat behind Bahrain's Salwa Naser (50.86), who is the favourite to win this event.

Mohd. Anas and Rajiv Arokia also made it to the men's 400m final, which will also be held tomorrow.

Anas qualifed for the final by winning his semifinal heat with a timing of 45.30 seconds, the best overall. Arokia (46.08) was second in his heat and made it to the final at overall sixth.    Earlier in the day, Anas, who has a personal best of 45.24, had topped heat 1, clocking 45.63 while Arokia Rajiv timed 46.82 to qualify for the semifinals.

National record holder Dutee Chand also qualified for the women's 100m semifinals by winning her heat with a fast timing of 11.38.

Running in lane 4, Dutee beat Kazakhstan's Olga Safronov (11.46) and Uzbekistan's Nigina Sharipova (11.59) to win heat number two. The effort though was slower than her national record of 11.29 which she had clocked in Guwahati in June.

In the women 10,000m, Suriya Longanathan (32:42.08) and Sanjivani Baburao (33:13.06) faded towards the end to finish sixth and ninth respectively. Long jumper M Sreeshankar also qualified for the final after finishing fourth in the qualification round by clearing a distance of 7.83m.

In the high jump also, Chetan Balasubramanya qualified for the final by clearing 2.15m. None of the 13 qualifiers, however, could touch the automatic qualification mark of 2.20m.

There was a disappointment also as Sarita Singh finished fifth in the women's hammer throw as she could only clear 62.03m, which was far behind the mark of podium finishers Na Luo (71.42m), Zheng Wang (70.86m) and Hitomi Katsuyama (62.95m).

Comments
Topics mentioned in this article
Asian Games 2018 Athletics Other Sports
Get the latest updates on IPL 2021, IPL Points Table , IPL Schedule 2021 , live score . Like us on Facebook or follow us on Twitter for more sports updates. You can also download the NDTV Cricket app for Android or iOS.