The 16-year-old Saurabh Chaudhary, son of a farmer, became the youngest Indian shooter to strike gold with a Games record of 240.7 in the 10m air pistol. 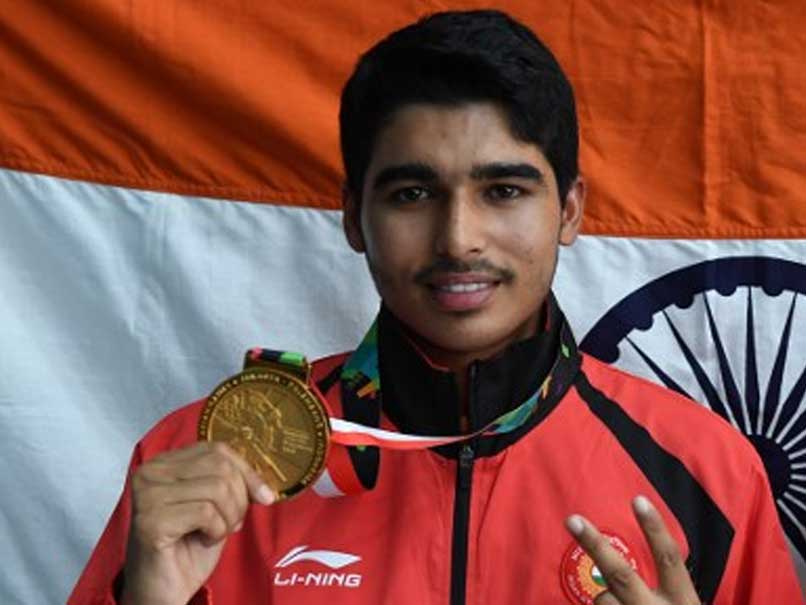 Saurabh Chaudhary won gold with a Games record of 240.7 in the 10m air pistol event.© AFP

An athlete not old enough to grasp the enormity of his feat struck gold, a seasoned but scarred pro found his silver lining and a man here for hobby collected a bronze as shooters dominated India's medal haul in the Asian Games on Tuesday. The 16-year-old Saurabh Chaudhary, son of a farmer, became the youngest Indian shooter to strike gold with a Games record of 240.7 in the 10m air pistol event in a field of Olympic and world champions, the one in which lawyer-cum-marksman Abhishek Verma (219.3) picked up a bronze to justify his hobby in Palembang.

"I did not feel any pressure. It doesn't help," said Chaudhary, a class XI student who picked up the sport only three years ago, when asked about the competition that included world champion Tomoyuki Matsuda of Japan and Jin Jong-oh from South Korea, the multiple Olympic and world champion.

Then came Sanjeev Rajput, a life and career scarred by allegations of rape by a woman he was in a relationship with. The 37-year-old, with his silver in the 50m rifle 3 positions event, continued his efforts of regaining a sense of at least professional normalcy. In normal circumstances, it would have counted for a mild disappointment given that he led after the kneeling and prone rounds. But, Rajput hoped that he could secure back a job, something that he lost after the allegations were made.

A medal trickled in from the wrestling arena in Jakarta with Divya Kakran picking up a bronze in the women's 68kg category. And the maiden bronze secured in sepaktakraw remained just that after India lost the semifinal to powerhouse Thailand in Palembang. Speaking of securing medals, one was assured in combat sport wushu. N Roshibini Devi advanced to the semifinal in women's 60kg Sanda event in Jakarta.

The Indian men's and women's kabaddi teams also secured emphatic wins against their respective opponents to qualify for the semifinals. The men's team bounced back from the shock 23-24 defeat against South Korea to beat Thailand 49-30 in its fourth and final Group A match. It had beaten Bangladesh 50-21 and Sri Lanka 44-28 before losing to South Korea.

In the women's competition, India played two matches and emerged victorious in both to top Group A with an all-win record and qualify for the semifinals.

In the first match of the day, the Indian women's team defeated Sri Lanka 38-12 before trouncing Indonesia 54-22 in its final group match.

On the tennis courts of Palembang, top seeds Rohan Bopanna and Divij Sharan breezed into the men's doubles quarterfinals while Ankita Raina entered the last eight of the women's singles.

Not to say there weren't disappointments, the biggest of them being star gymnast Dipa Karmakar, who failed to make the finals of her pet vault event, the one which brought her into national limelight after a fourth place finish at the Olympics. She, however, made the balance beam finals with a seventh place in the qualifying round. The heartbreak moment of the day was swimmer Virdhawal Khade missing a medal by one hundredth of a second in the 50m freestyle event. Khade improved his national record but ended fourth with a timing of 22.47sec.

The Indian women's volleyball team slumped to its second consecutive defeat, losing 0-3 to Vietnam in a Pool B preliminary match. The Indians gave a good fight to their opponents in the first two sets before losing the encounter 18-25 22-25 13-25 that lasted an hour and six minutes.

Also, the women's handball team's campaign ended with a fourth successive defeat. India lost 19-49 to North Korea in their final Group A match to bow out of the competition without locking any points.

Comments
Topics mentioned in this article
Other Sports Shooting Asian Games 2018
Get the latest updates on IPL 2020, check out the IPL Schedule for 2020 and Indian Premier League (IPL) Cricket live score . Like us on Facebook or follow us on Twitter for more sports updates. You can also download the NDTV Cricket app for Android or iOS.